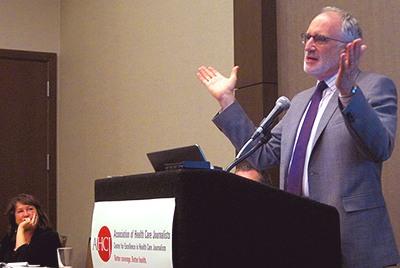 For instance, carcinogenic chemicals, such as benzene, may escape and contaminate the groundwater around the fracking site and emit toxic substances into the air, said Cara DeGette, editor of Colorado Public News and moderator of the “Fracking, drilling, and other environmental health concerns” panel at Health Journalism 2014.

Lisa McKenzie, research associate at the Colorado School of Public Health, summarized fracking’s health impact studies, most of which have taken place only in the past five years. Early studies have evaluated potential health outcomes of exposure to each of the 900 chemicals used in fracking. Interviews with residents living near fracking sites and sampling water for health risk assessments have also taken place.

“What is important to keep in mind is the scale at which exposure could occur,” McKenzie said. “Development could be very near a home, or at a regional scale. Where you collect samples makes a big difference.”

People living in natural gas well pads have self-reported health effects and psychological effects, such as stress from lost livestock, associated with chemicals used for fracking. “An ecological study shows the cancer rate was higher after gas development,” she said, noting that scientists are unable to show that exposures happened before the disease happened or how people are actually exposed.

The current minimum allowable proximity to a home for a gas well is 150 feet, but public health researchers have yet to determine if that is a safe distance. They also have not assessed the impact of health of workers.

Lee S. Newman, an environmental and occupational health physician of the Colorado School of Public Health, has been studying numbers on the experiences of fracking workers. “It’s accepted in a cavalier way that these are risky professions, and that’s just the price to pay for this work,” he says.

Data from the National Institute for Occupational Safety and Health show more oil and gas deaths compared to other U.S. industries. Newman is interested in how people die on the job: highway crashes and being struck by objects are high on the list.

“Injuries are occurring more often with small companies,” he said. “Bigger ones have system of safety management. Small companies, not so much.” Because the oil and gas industry relies heavily on subcontractors, a large proportion of workers come from these smaller companies.

Interestingly, injury rates in the oil and gas industry are three times lower than those seen in the construction industry, even though fatalities are two-and-a-half times higher.

“What we think, but can’t yet prove, is that this is an issue of underreporting,” Newman said. “People would rather have a job than no job at all, and that’s a real drive for people to work and employers to keep them working.”

While the speed of resource extraction in recent years has seemed to violate the precautionary principle of public health, there is a glimmer of hope. Recently, the American Journal of Industrial Medicine published a case study of how government industry groups, academia, public health officials and community members in Wyoming are working together to answer concerns about fracking.