Kristina Fiore is a staff writer for MedPage Today, focusing on diabetes, nutrition, and addiction medicine, and has written for New Jersey Monthly, ABC News, Newsday and other newspapers and magazines.

View all posts by Kristina Fiore → 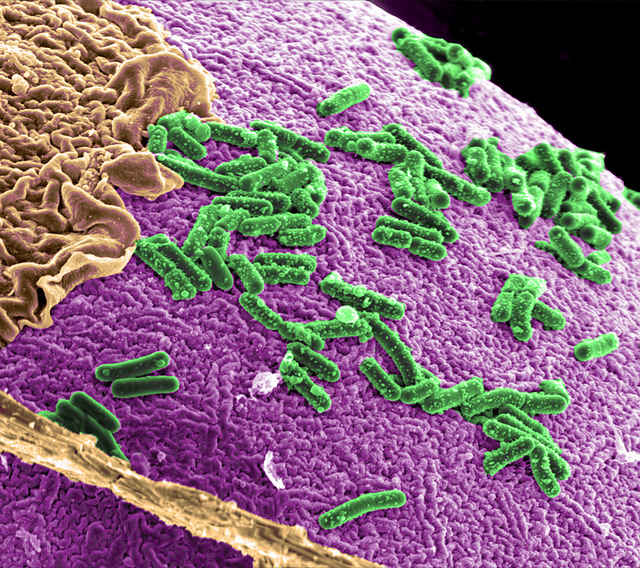 With falling costs of genetic screening, research into the body’s microbial community has grown tremendously, offering new insights into what constitutes a healthy population of “bugs” and how these organisms are involved in disease, according to a panel discussion on Friday at Health Journalism 2014.

Bacteria account for about three pounds, on average, of our body weight – about the same size as the brain – and communities in various organ systems differ vastly, according to panelist Rob Knight, Ph.D., of the University of Colorado.

Knight’s lab develops technology that helps researchers turn data on these microbes into visual information – it’s been used for the Human Microbiome Project – and one representation shows just how divergent populations can be from one body part to the next.

If the community of bacteria in the mouth are like the environment of a coral reef, he said, those seen in the gut may be as far away as a prairie: “A couple feet [distance] in the human body makes as least as much difference in the microbial community as hundreds of miles over the earth’s surface.”

Researchers have been interested in what implications our microbes have in disease, particularly early on in the life cycle. Knight noted that some studies have linked C-section – in which the baby is deprived of exposure to the mother’s vaginal microbial community – with asthma, autoimmune conditions and obesity.

It’s also raised the question of what constitutes a healthy microbiome, since these bugs have essential functions such as extracting calories and vitamins from the diet, and protecting against enteropathogens and metabolic disease, according to panelist Catherine Lozupone, Ph.D., of the University of Colorado Anschutz Medical Campus.

The answer is that a healthy microbiome is context-specific, Lozupone said, depending largely on age and diet.

Bacterial colonies change significantly as people get older, and work has shown that in disease states, the gut microbiota revert to populations seen early in life.

People in the U.S. have an abundance of Bacteroides in their intestines, while agrarian societies have more of the genus Prevotella – and that may be ideal for their respective diets, Lozupone said.

Researchers are investigating how they can translate knowledge of these microbial communities into more efficient means of treating disease, according to panelist Nadim Ajami, Ph.D., of Baylor College of Medicine.

That includes a focus on engineering better probiotics, Ajami said.

The panelists also lamented what they call a potential barrier to one particular advancement the field: the FDA’s requirement for an investigational new drug application (IND) for research into fecal transplant – “as if you’ve discovered a new small molecule or a new antibody,” Knight said.

Since that can be cost prohibitive, he said, some researchers have suggested classifying fecal transplant as a human tissue like other organ transplants instead of a biologic.

Kristina Fiore is a staff writer for MedPage Today, focusing on diabetes, nutrition, and addiction medicine, and has written for New Jersey Monthly, ABC News, Newsday and other newspapers and magazines.