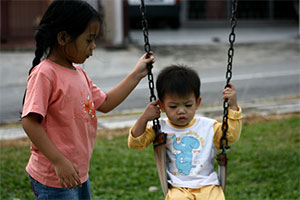 It’s great that the rapid rise in youth obesity since the 1980s has started to level off. But there’s an unsettling trend hidden in the data: Progress has largely been limited to kids from more educated and higher income families, according to a recent analysis that got less news coverage than it should have.

Among teenage children of parents with a college degree, they found that the prevalence of obesity began to drop about 10 years ago, while it continued to climb among the teenagers of parents who have at most a high school degree. They found the same trend when they used estimates of family income, rather than education, to measure socioeconomic status. (The growing gap is not merely a reﬂection of racial or ethnic differences, they say, because it persisted even when they limited the analysis to non-Hispanic whites.)

Disparities between rich and poor in obesity rates are not new, and they are only one of many health gaps that make poor patients sicker and more likely to die prematurely than richer ones. But if the public health message on obesity “has not diffused evenly across the population,” as the authors of the latest report suggest, this disparity could stymie efforts to stem a tidal wave of costly obesity-related diseases in the years ahead.

Below is the researchers’ comparison of obesity rates among 12- to 17-year-olds by parental education. Panel A is data from National Health and Nutrition Examination Surveys and B is from National Survey of Children’s Health. (BA = bachelor’s degree, HS = high school) 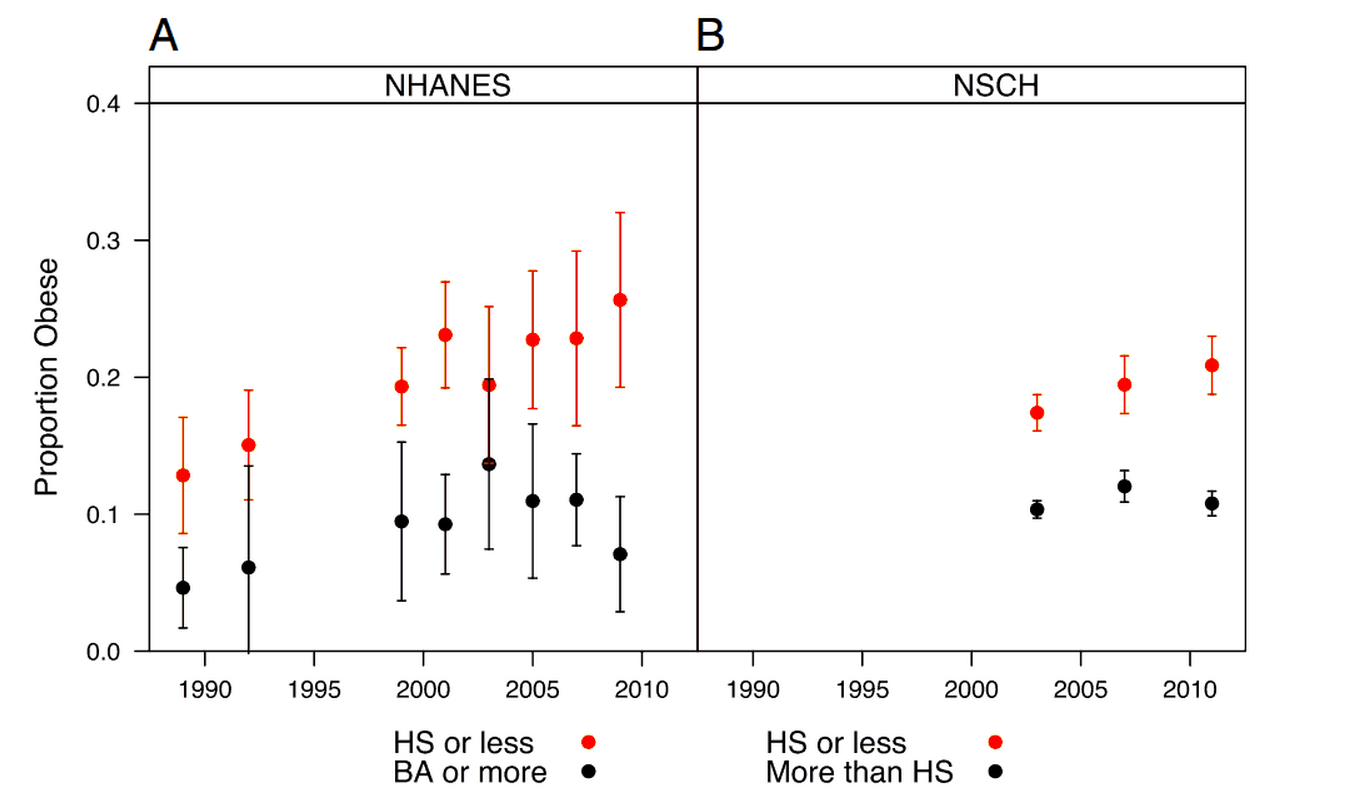 Physical activity – or the lack of it – emerged as a key factor in the worsening gap, according to the researchers. Average daily calorie intake declined across the board, but not much differently by education or income. Exercise habits diverged significantly. Children of college-educated parents became more active than they were a decade ago, while children of less educated parents showed no improvement.

Why this is so remains a mystery. Putnam and co-authors mention one intriguing fact: Participation in high school sports and clubs has decreased among kids from lower socioeconomic households, while it has increased among those higher up on the education/income ladder. I’d love to see more reporting on this.

It’s become conventional wisdom to say that low-income neighborhoods are a barrier to being physically active because they aren’t safe and lack parks, recreational centers, walking trails, etc. But the evidence for that is weak, and some findings suggest to me that yet-to-be nailed down sociocultural factors may be much more important.

It’s unclear, for instance, whether any amount of nearby parks and playing fields could overcome the allure of video games and online socializing in homes where kids have unlimited screen time. The effects of income and education tend to trump the influence of neighborhood characteristics. This is pretty obvious in a built environment atlas of health produced by the county where I live in Portland, Ore. Dunthorpe, an extremely wealthy enclave in Southwest Portland, scored among the worst for a health-promoting environment, having fewer bike paths, walking trails, public transit hubs, recreation facilities, and grocery and other stores within walking distance. But its residents are among the longest lived and least likely to be overweight. Less well-off Troutdale, Ore., has more bike paths, recreation facilities, and grocery stores than Dunthorpe but has one of the highest rates of obesity. And nearby Wood Village, with a mix of medium and low-income residents, has a high density of grocery stores and above average access to walking trails and bike paths, but ranks among the worst for longevity and obesity.

What’s often ignored is that obesity is the end result of a process that often starts very early in life. In the Early Childhood Longitudinal Study, which tracked 7,738 kindergartners for a decade starting in 1998, half of the cases of obesity that arose were among kids who had become overweight during the preschool years. And that’s after exclusion of the 12 percent of children who were already obese in kindergarten, researchers reported this week in the New England Journal of Medicine. Overweight 5-year-olds were four times as likely as normal-weight children to become obese by the end of the study.

In many cases, the trajectory toward obesity is set in motion before birth. The authors of the NEJM paper reported that high-birth-weight children made up 12 percent of the population but accounted for more than 36 percent of those who were obese at age 14 years. It’s not yet clear what all is going on in the womb, but an expectant mother’s severe undernourishment, or substantial overnourishment, can alter fetal metabolism and brain development, making offspring more prone to obesity, according to a growing pile of research.

Some of the social changes we’ve allowed, or even embraced, are making it tough for young kids to avoid unhealthy weight gain. Food companies, for instance, spend more than a billion dollars a year marketing nutrient-poor, calorie-dense convenience meals and snacks to children, producing measurable changes in food preferences and eating habits. During infant development, observational studies have linked bottle-feeding rather than breast-feeding to weight gain. Lack of sleep, a trend affecting even toddlers, appears to promote obesity by disturbing the regulation of the hormones that drive appetite and the body’s rate of energy use.

The influence of such factors probably varies substantially with income, education and cultural background. And this list, off the top of my head, is far from exhaustive. There’s a lot left to report on this issue.