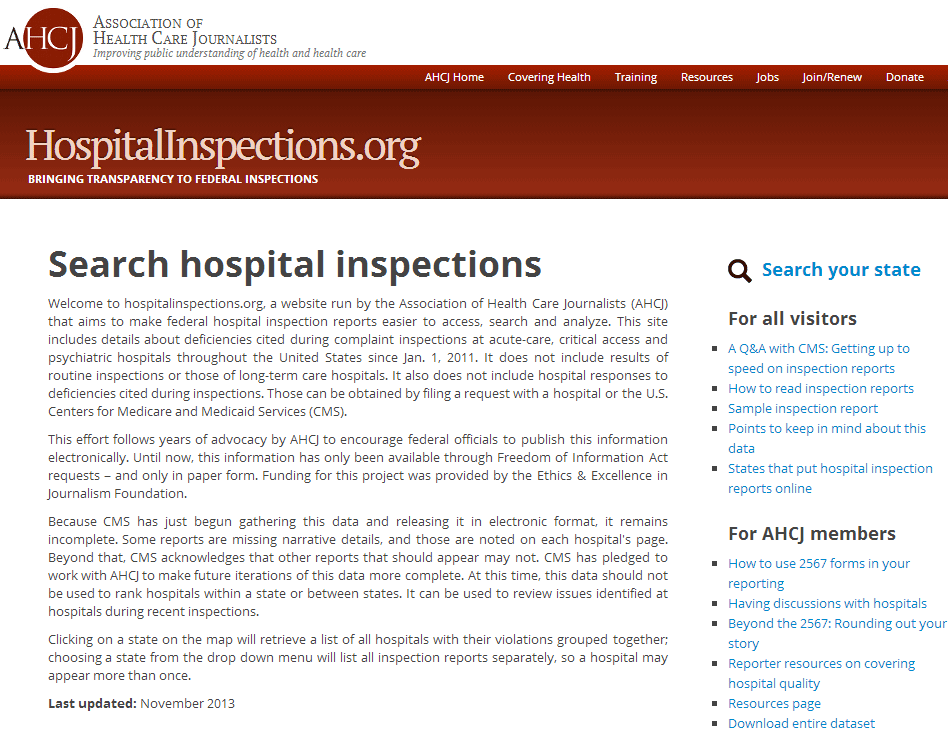 AHCJ has updated its HospitalInspections.org website and the downloadable version of the data to include reports from most of 2013. The database – obtained from the Centers of Medicare and Medicaid Services – now includes psychiatric hospital complaint-based inspection reports. Previous versions included only acute-care and critical access hospitals.

The database includes reports about deficiencies cited during complaint inspections throughout the United States since Jan. 1, 2011. The new records include June through September, with a handful of October reports. It does not include results of routine inspections or those of long-term care hospitals. It also does not include hospital responses to deficiencies cited during inspections. The website explains how to obtain that information.

The update added 2,976 records with inspection details, giving the database a total of 9,152 records. Some state health departments and CMS regional offices have lagged in uploading deficiency reports to the agency’s main database. CMS has identified the hospitals with missing reports, and they are labeled as such on hospitalinspections.org. CMS has committed to working with its regional offices and state counterparts to speed the uploading of inspection reports so that the public has access to this important information. The updated database includes 429 inspections lacking details.

AHCJ launched the free, searchable news application in March. The inspection reports have been configured by AHCJ to be easily searchable by keyword, city, state and hospital name. The website is open to anyone, but only AHCJ members have access to a downloadable version and additional resources to help users understand what is being reported and what is not. These caveats are important for putting the information into context.

Funding for the hospitalinspections.org project was provided by the Ethics and Excellence in Journalism Foundation.