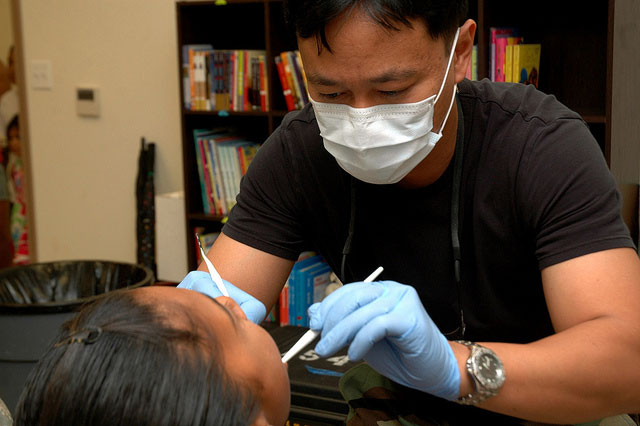 Catherine Saint Louis of The New York Times took a hard national look at the pediatric dental benefits being offered on the state exchanges under the Affordable Care Act.

Her reporting led her to the troubling gulf that oral health advocates have been warning about.

While kids’ dental coverage is included as one of the 10 essential health benefits under the nation’s health care reform law, “pediatric dental care is handled differently” from other coverage on the federal and state exchanges, she wrote in her Dec. 16 story, “A Gap In the Affordable Care Act.”

Dental plans “are often sold separately from medical insurance, and dental coverage for children is optional,” she noted. “People shopping on the exchanges are not required to buy it and do not receive financial support for buying it.”

Experts have cautioned that the problems could leave millions of children without access to dental care.

“It’s letting kids down in my mind, and it is clearly inconsistent with congressional intent,” Dr. Paul Reggiardo, the chair of the American Academy of Pediatric Dentistry’s Council on Dental Benefit Programs told Saint Louis. “The intent was to include all children. Now it only includes some.”

Roughly 3 million children were expected to get dental coverage on the exchanges by 2018 if it had remained a mandatory purchase, she wrote.

But that plan went awry, in part because most dental coverage is offered separately from other health benefits. On the exchanges, dental coverage may be bundled with other benefits, embedded into plans or sold as separate stand-alone coverage.

But as Saint Louis reported, not every option is available in every state.

And she concluded “it is the stand-alone dental plans that worry policy experts and deter consumers on the exchanges.”

In many states, there is no requirement that parents buy the stand-alone benefits. The stand-alone plans are also exempted from the health care law’s limits on out-of-pocket expenses. And the parents who go ahead and buy the stand-alone dental coverage for their children anyway cannot currently expect the same subsidy they receive for medical coverage, thanks to a ruling by the Internal Revenue Service.

Saint Louis spoke with a California dad who logged onto the state exchange, Covered California, to buy coverage for his family, including dental benefits for his children. The only option he was offered was a stand-alone plan, which did not qualify for the same subsidies as medical plans on the exchange.

“An embedded plan would provide subsidized coverage, but there isn’t one on the California exchange. By contrast, all health plans on the exchanges in Connecticut, the District of Columbia and Vermont include children’s dental benefits.”

Now, she added “more than a dozen senators and several advocacy groups representing dentists, insurers and consumers have asked the Internal Revenue Service to revisit its decision to deny subsidies to purchasers of stand-alone dental plans for children.” (PDF of letter)

“The lack of a subsidy could have an influence on the purchase of coverage,” Evelyn Ireland, the executive director of the National Association of Dental Plans, told her, adding that “all of our organizations will push for resolution by early next year.”

The U.S. Department of Health and Human Services also now receiving public comments on a proposal to lower the annual out-of-pocket for stand alone dental plans.

So things may change for children’s dental benefits on the health exchanges. Stay tuned.