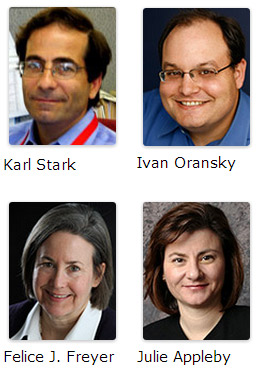 The AHCJ board of directors elected a new set of officers for 2013-15 to take their seats this week.

Karl Stark of The Philadelphia Inquirer was named president, Ivan Oransky of MedPage Today was named vice president, Felice J. Freyer of The Providence Journal was named treasurer and Julie Appleby of Kaiser Health News was named secretary. Charles Ornstein of ProPublica, and board president for the past four years, remains on the board. He did not seek another officer position.

A new board was seated after July elections by the entire AHCJ membership. The board members then voted on officers.