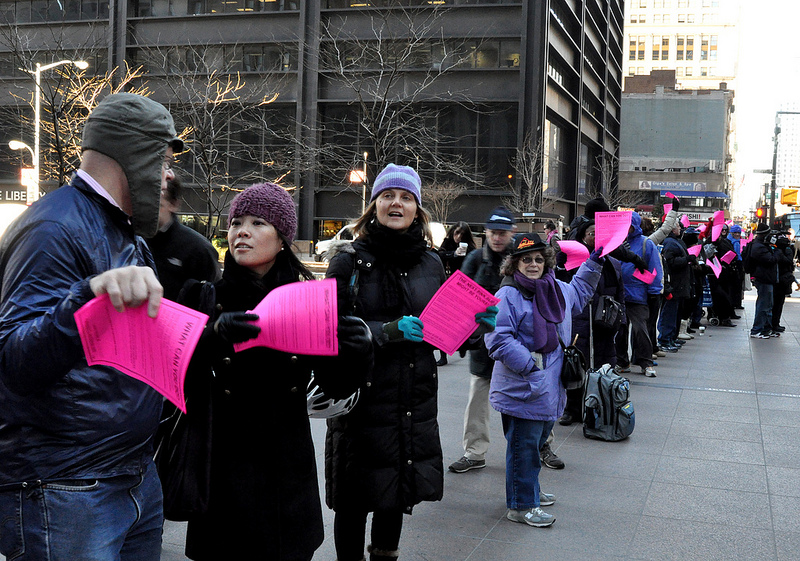 Photo by Michael Fleshman via Flickr.comOccupy protesters form an unemployment line in Manhattan and show their pink slips.

We’ve all seen the stream of headlines: Obamacare is taking our jobs.

Or, “Obamacare turns us into a part-time nation.”

But are they true – or how true?

Julie Rovner of NPR did a great job of taking apart and explaining the claims and counterclaims, which are particularly heated around the restaurant and fast food industries. What’s anecdote? What’s trend? What’s reality?

It’s hard to pick up a newspaper or turn on a television without seeing a story about some boss cutting workers’ hours or saying they won’t be doing any more hiring because of the health law.

But is the law really having an impact on the economy?

Not surprisingly, it depends whom you ask.

The question is, are businesses really cutting back to stay under 50 full-time employees because of the Affordable Care Act? Above that, employers are required to offer affordable coverage to workers or face penalties.

Keep in mind that we’ve been moving toward more part-time, temporary and no-benefit jobs for years – and it’s hard to figure out how much of the recent changes in that direction are because of health reform versus other factors arising from the economic crash and sluggish recovery,

So is business right? Is Obamacare is killing full-time employment, particularly in the service sector?

Or is the White House correct? In late July it replied with a data analysis showing it’s not really that big a shift.

Rovner explained that both sides may be right – depending on how you slice and interpret the data – and whether you are looking at the huge overall U.S. economy or the impact on individuals.

The White House said only about 1 percent of the workforce would be affected by health law requirements. As Rovner reported “that’s not a big enough group … to really affect the economy on a macroeconomic level.”

But what’s 1 percent of the workforce? Turns out it’s more than a million people and, as Rovner says, that’s “more than enough to make for a lot of anecdotes.” And, of course, if you are among that million who lost a job or had hours cut back, it’s a big impact on your own personal macroeconomy.

Rovner also looks at what would happen if Congress changed the definition of full time from 30 hours, which is what the ACA says, to 40. Or instead of requiring coverage at 50 workers, what if it went to 75 or 100 or more? There would still be an impact and perverse incentives – but they would migrate to another touchpoint in the economy. (Although as she noted, it’s tough to get any fixes or changes through the divided Congress. Part of that is because one side doesn’t want to fix it – it wants to abolish it. And it’s partly because of the way Senate procedures work: If they start considering one piece of the law, they open the door to fighting about all or much of it.)

Below are a few resources that shed light on this part-time employment argument and may help you write about it in your own community. One story I’d love to see – do these employers cutting or threatening to cut workers’ hours have any low-wage employees who would qualify for Medicaid, in states that expand Medicaid? Do they realize that? And do they realize they don’t get penalized for those workers that qualify for expanded Medicaid? And do any of the businesses cutting workers actually have fewer than 50 workers – and not realize they don’t have to cover them in the first place?