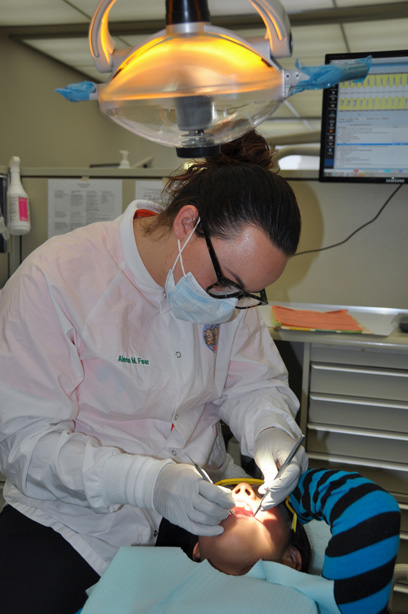 Advocates for the poor and uninsured have worked long and hard to bring attention to the shortage of dental care for millions of Americans.  On Wednesday, the American Dental Association weighed in on the problem too, announcing a nationwide campaign designed to respond to address what leaders called the nation’s “dental crisis.”

“We’ve made great progress with each generation enjoying better dental health than the one before,” ADA President Robert Faiella, D.M.D., noted. “But there is still a dangerous divide in America between those with good dental health and those without. Our mission is to close that divide. Good oral health isn’t a luxury – it’s essential.”

Yet many go without that care.

While a vast majority of middle- and upper-income Americans reported good access to dental services, nearly half of lower-income adults said they had not seen a dentist in a year or more, according to a Harris poll released by the ADA as part of the campaign’s launch. The poll also found that poor Americans are more than two times as likely to be toothless than their wealthier counterparts and that low-income adults were far more likely to seek last-resort care in emergency rooms than their better-off counterparts.

Nearly 1 in 5 low-income adults said they or a household member had sought treatment for dental pain in an emergency room.  Yet only 6 percent of the poor who went to ERs for help with dental emergencies said their needs were met, the poll found.

The Action for Dental Health campaign includes a number of strategies intended to address the problems faced by different populations. One initiative would divert patients with dental emergencies from hospital ERs to local dentists and clinics where their needs might be appropriately addressed. Others would focus on delivering preventive care and basic treatments by getting more private practice dentists to contract with federally qualified health centers (FQHCs), increasing the free care dentists offer at Give Kids a Smile events and expanding care to nursing home patents through a long-term care initiative.

The campaign also seeks to streamline Medicaid credentialing processes and increase reimbursement rates as a way of getting more dentists to treat the poor.

Some of the advocates who have been working for broader changes in the system said they were glad to hear the ADA acknowledging the lack of care experienced by millions of Americans.

“I think it’s an important step they took in calling attention to the access crisis,” said Jane Koppelman, research director for the Children’s Dental Campaign at the Pew Charitable Trusts.

But she and others said the ADA campaign stops short of getting to the heart of the dental crisis. They point to the lack of providers in poor and isolated places such as the thousands of federally-designated dental health provider shortage areas.

“To me it seems like they are talking about referral mechanisms. But what do you do when there is no dentist to refer to?” asked Sarah Wovcha, executive director of Children’s Dental Services, a Minneapolis, based nonprofit which operates scores of clinics treating poor children. “We need more affordable dentists or another type of provider.”

Recently the work at Wovcha’s clinics has been done with the help of dental therapists, midlevel dental auxiliaries trained to do such things as fill cavities, place crowns, give local anesthesia and, in some cases, pull teeth.

Wovcha says the therapists, who work under a dentist’s supervision, provide high quality care at a low cost, allowing her to reach more patients in need. She believes the model, now used only in Alaska and Minnesota could help answer needs across the country. With support from organizations including Pew, Kellogg and Community Catalyst, grassroots efforts aimed at giving the model a try are pressing forward But they are meeting with fierce resistance from the ADA.

What is going on in your state to address the nation’s dental crisis? Now might be a good time to ask.