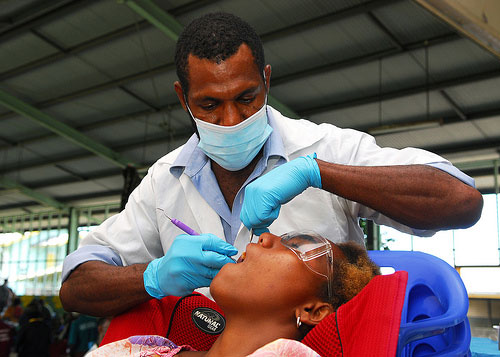 In spite of fierce opposition by some mainstream dental groups, workforce auxiliaries known as dental therapists are now at work in Minnesota.

And two dentists who work with them are attesting to their abilities in new YouTube videos, released by the Pew Charitable Trusts.

In one, John T. Powers, D.D.S., a private-practice dentist in Montevideo, Minn., says that working with a dental therapist has helped him expand access to care in his rural town. The therapist, trained to perform procedures including pulpotomies, extractions and to place stainless steel crowns has freed him to do more time consuming and complex procedures, Powers says.

In a second, Shiraz Asif, D.D.S., clinic dental officer at a community health clinic in Minneapolis, also describes the perks of working with therapists.

“They’ve turned out to be a great help,” Asif says.

These will surely not be the last words on the subject.

Pew, as well as the W.K. Kellogg Foundation and other philanthropies and grassroots organizations, continue to work to get therapists into place in states where care is lacking for millions of Americans. As they point out, the model has been in use for years in many other countries.

But mainstream dental groups, including the American Dental Association, have fought back hard, arguing the model is not the answer to shortage of care in poor, isolated and rural areas. The ADA says that raising Medicaid reimbursement rates would do far more to solve the problem.

After Pew issued a 2010 report “It Takes a Team” exploring the potential benefits of adding therapists to dental practices the ADA responded with a highly critical rebuttal:

The dental organization’s own analysis concluded the therapist model would drive down the cost and price of dental care and the income of dentists while doing little to increase utilization of dental services.

“The ADA unequivocally shares the same aspirations as Pew when it comes to advancing the oral health of all children and eliminating access disparities. However, while researchers differ in methodology and views, in this analytical review, we have shown that the Pew report uses unreasonable assumptions, faulty economic analysis and; thus, delivers erroneous conclusions – which may end up harming rather than helping the cause they are advocating.”

2 thoughts on “Despite ADA’s stance, dentists praise use of therapists”