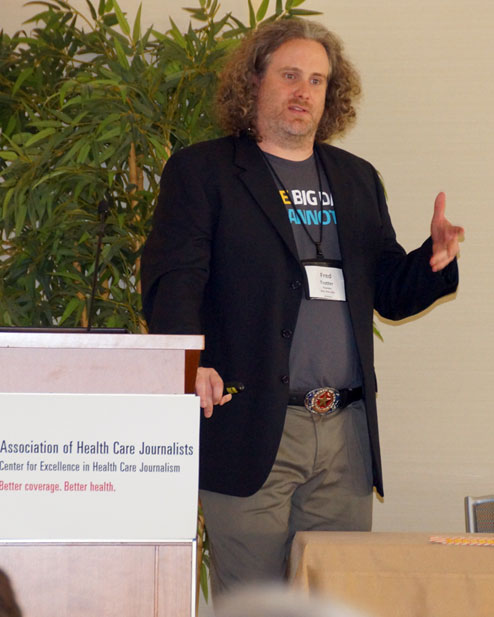 Going online is usually a great way to waste time or — for adventurous social media users — get in trouble.

For resourceful journalists, however, the Internet is a treasure trove of information that can be invaluable for reporting. These include providing access to open-source tools such as DocGraphs, which can provide crucial data that may not easily be available anywhere else.

A crowdfunded project from open source developer Not Only Dev, DocGraphs aims to shed light on the relationships between various medical providers, and make that information more accessible to the public. Examples include which doctors and medical centers a specific doctor refers patients to or which laboratories a physician group tends to use.

“What it does is create a system that allows you to dig around for stuff that’s harder to see,” said Fred Trotter, Not Only Dev founder and author of “Hacking Healthcare,” at Health Journalism 2013.

DocGraphs contains information on 50 million doctor connections, making it the largest database of its kind to show actual doctor names and be released publicly, Trotter said. To do this, DocGraphs uses Medicare data acquired through a Freedom of Information Act request. The project then organizes the data to allow users to do searches by name, organization or hospital. In many cases, the search turns up results that may not be out of the ordinary. When used on bad doctors, however, the search results can provide reporters the “Eureka” moment they’re looking for. One example includes finding troubled doctors who create corporations and name themselves as the contact person in order to avoid scrutiny.

“The fact that you cannot just search people but organizations as well makes this extremely useful [for identifying fraud],” Trotter said.

At the same time, the project has its limitations. Being based on Medicare data, for example, means it doesn’t capture doctors who treat younger patients. The sheer amount of information also means it is not ideal for random searching and works best when used with actual leads. For reporters who use it properly, however, DocGraphs can be a powerful tool, said Trotter who continues to add features to the project.

“What we’re trying to do is save time for reporters … by helping them find these kinds of fraudulent relationships more easily,” Trotter said.