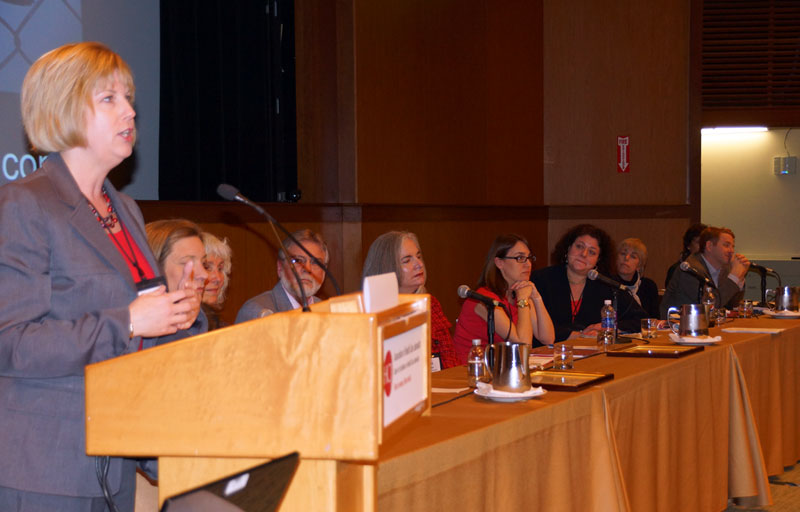 How does one report a story that has real impact? Ten of the first-place winners of this year’s Awards for Excellence in Health Care Journalism shared their tips during a panel at Health Journalism 2013. Among the highlights:

Request patient records
Janet Adamy of The Wall Street Journal, along with Tom McGinty, won first place in the health policy category (large) for “The Crushing Cost of Care” – their story chronicling the life and death of Scott Crawford, a 41-year-old heart transplant patient who racked up one of the country’s highest Medicare bills. Adamy said most hospitals have a form on their website that patients can sign to request their medical records.

“There’s no way I could have done this story without that,” she said. “I think it’s an incredibly powerful reporting tool.”

Show up in person
Adamy also emphasized the importance of meeting people in person when trying to persuade them to participate in sensitive stories. After Crawford’s family was initially taken aback by her inquiries, she said, she offered to drive three hours to their community and take them out to lunch.

“I never would have gotten these people to participate if I had done this by phone or emailed them,” she said. “You just can’t replace the value of going and seeing someone in person. You almost always get more.”

Use social networking
Kay Lazar, who along with others at The Boston Globe won in the public health category (large) for their coverage of a fungal meningitis outbreak tied to contaminated drugs, said her team of reporters relied heavily on social media from very early on. She said they used LinkedIn to reach former and current workers in the factory where the contaminated drugs originated.

“You don’t know what you don’t know,” she said. “We found goldmines of information from writing FOIAS very broadly.”

Pay attention to public myths
Kate Long, of The Charleston Gazette, who along with Kyle Slagle and Dawn Miller, won in the public health category (small) for their work on chronic disease and obesity in West Virginia, suggested choosing stories that tackle public myths.

Many in West Virginia subscribe to the belief that “this is just the way we are,” she said. In fact, until recent decades, she said, “we were very lean people.”

Put in the time to make sure you have a story before you pitch it
Alison Ann Young, of USA Today, who won first place in the investigative category (large) for “Ghost Factories” – a 14-month investigation into lead-contaminated factory sites that she co-wrote with John Hillkirk and Peter Eisler – said she has often worked nights and weekends to make sure she has a good project before she pitches it to her editors.

“Answer your editors’ questions and make it easy to say ‘yes,’” she said.