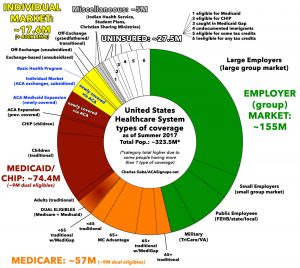 The idea behind a single-payer health care system is simple: Have one entity pay for all health care. The result would be universal health insurance or coverage for all. This idea has long been politically unfeasible because it was considered to cost too much, disrupt almost 20 percent of the economy, and eliminate the need for employer-sponsored health insurance, which covers about half of all Americans. END_OF_DOCUMENT_TOKEN_TO_BE_REPLACED 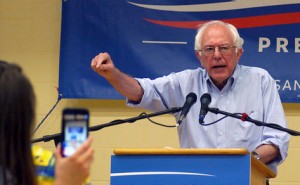 To my surprise, most of them said, more or less, “Thanks, but no thanks.” It’s not that they wouldn’t like a single payer plan, in theory. Most would: it’s been a Democratic aspiration for decades. But they recognize it’s not going to happen in the immediate future. Or even in the not-so-immediate future. END_OF_DOCUMENT_TOKEN_TO_BE_REPLACED

You may have seen a lot of breathless coverage about how Vermont is poised to become the first state to have a single-payer health care system. Don’t get too out of breath.

Vermont did pass legislation, signed by Gov. Peter Shumlin today, laying out a pathway toward – perhaps – getting to a single-payer system in 2017. And by all accounts, Shumlin, who ran on a single-payer platform, truly wants to get there, as do many of his supporters in and out of Vermont government. So this post isn’t meant to be cynical about their intentions or sincerity. It’s just that Vermont’s path toward its single-payer system, Green Mountain Care, is way longer and far more unpredictable path than a lot of the overexcited news coverage suggests.

The Burlington (Vt.) Free Press published a 15-step timeline – and even that wasn’t complete despite a lot of contingencies and unknowns and maybes. Among other things, Vermont’s state legislature  hasn’t determined how to pay for the single-payer plan (probably it will propose some kind of tax that people and or businesses would pay, but they would no longer have to pay insurance premiums). They aren’t even going to recommend the payment system until January 2013, and then they still have to get it through the legislature in the winter of 2016.

Who knows who will be governor of Vermont, or U.S. president or secretary of HHS by then. Or how businesses in Vermont – IBM is the one that gets mentioned most in the coverag­e  – will respond to a new tax proposal, particularly if they don’t want their employees in the state system (or their employees don’t want to be in the state system) and they have to keep paying the costs of their workers health plan plus a new state tax or surcharge for everybody else’s.

That’s not to mention the doctors. Sure some are for a single-payer system; it’s a progressive state and maybe a lot of the physicians are pro-single-payer. But you can be sure not all of the doctors, hospitals and clinics want to be part of a state-run plan where rates are set and they may have less bargaining power or ways to cost-shift. It’s probably a safe bet that the insurance industry will object to a state plan that largely or completely displaces them,  even though Vermont is not exactly the nation’s most gigantic market.

At this stage,  Vermont is still at work on setting up its health exchange (and a few states are actually farther along, although not that many).  Vermont is a liberal state with a history of health care innovation so it’s no surprise that it is doing an exchange, unlike some more conservative states that are threatening to sit it out and let the federal government do it.

Some officials in Vermont call it the “single exchange” but that’s not the same thing as single-payer.  The exchange will have a lot of power to set the rules for health coverage and cost containment in the state, it won’t just be an electronic bulletin board or listings. They are trying to design the state exchange, administratively, in a way that can serve as a foundation, or transition point, to an eventual single-payer plan, as well as some consumer protections so that people know what benefits they are buying – and will get them.

The federal money that will become available in 2014 under federal health reform will go into a payment pot within the new state exchange, and Vermont will try to bring into the exchange  the newly insured, small business employees, and people who have been buying insurance on the individual market  (some of whom will be getting federal subsidies to get covered in the exchange) .

Vermont also wants to bring in the state’s public employees and, at some point, Medicaid recipients. The Medicaid piece will depend on getting federal waivers. It’s not clear to me how much of that happens in 2014, or which groups are phased in later. In theory they also want to bring Medicare recipients in when they go full single-payer in 2017, but that would require even more waivers and rule-bending. Plus there’s workers comp to deal with in some capacity and ERISA (the federal law which governs multi-state health plans, like that covering an IBM worker and dependents).

So could Vermont have a single payer system by 2017? Yes. Has the state approved a plan how to get there? Sort of. There are lots of gaps in the plan – and the coverage.