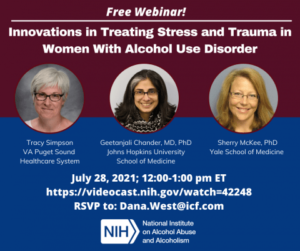 While recent headlines have pointed out the disastrous rise in opioid use during the pandemic, less attention has focused on alcohol consumption during the pandemic and relapses among those with alcohol use disorder. Even more under-recognized is the prevalence and burden of alcohol use disorder among women, who too often aren’t included in discussions about the condition.

Yet research from the National Institutes of Health shows that the gender gap between men’s and women’s alcohol consumption is narrowing — and that’s not a good thing. Higher levels of alcohol consumption had already been on the rise in older adults and particularly in women prior to 2020, and the pandemic has only exacerbated this health issue. END_OF_DOCUMENT_TOKEN_TO_BE_REPLACED

The journalists, from a wide range of outlets, will visit the National Institutes of Health in September. The visit will include hands-on workshops about how to use and get the most from several government research databases, such as PubMed, MedlinePlus, ClinicalTrials.gov and ToxNet. Fellows also will meet with senior NLM and NIH researchers and officials for exclusive informational sessions.

The fellowship program was created to increase reporters’ access and understanding of the considerable resources available at NLM and the National Institutes of Health.

Read more about the program and find out who was selected. 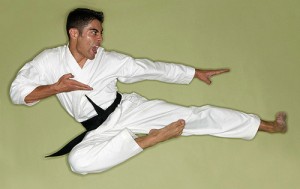 It’s just about impossible to report on medical research without becoming intimately familiar with PubMed. But just because a reporter uses the database site doesn’t mean they’re getting the most out of it.

How often have you used a service, such as an email client or a social media site, for years when someone suddenly points out to you a shortcut or a feature you’ve never used and didn’t know existed? Chances are  that there’s at least one new skill you can pick up in Hilda Bastian’s tip sheet on using PubMed. END_OF_DOCUMENT_TOKEN_TO_BE_REPLACED 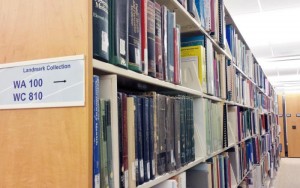 Photo: CDC/Emily WeyantTwo federal health agencies are tackling social issues related to health care. Results from other studies are available at the library of the Centers for Disease Control and Prevention.

Data is the new king of journalism, but when it comes to some aspects of the social sciences – such as the social determinants of health – the numbers can be a bit tricky to nail down.

First, the Centers for Medicare and Medicaid Services (CMS) this month announced a pilot program to tie medical services for beneficiaries to housing, food, transportation and other social services. END_OF_DOCUMENT_TOKEN_TO_BE_REPLACED

At a conference last year, Michael Laposata, M.D., Ph.D., one of the nation’s best known pathologists, explained how clinical laboratories could deliver more value to patients, physicians, and health insurers. To do so, pathologists and laboratory scientists need to provide more detailed explanations about lab test results because even physicians who order genetic and molecular tests are often confused about the results, said Laposata, chairman of the Department of Pathology at the University of Texas Medical Branch.

When he explains test results to ordering physicians, he frequently refers to an “allele” which is one of two or more versions of a gene, he said. When he does, physicians sometimes ask, “What’s an allele?”

His anecdote is telling following President Obama’s announcement last month that he recommended spending $215 million on the precision medicine initiative. The announcement was correctly hailed as an important and needed investment in medical technology. “Precision medicine” is described by the National Institutes of Health as “an emerging approach for disease treatment and prevention that takes into account individual variability in genes, environment, and lifestyle for each person.” END_OF_DOCUMENT_TOKEN_TO_BE_REPLACED