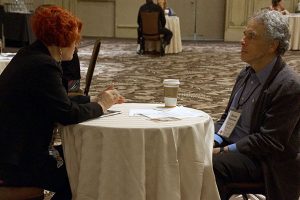 Corcoran was a well-loved editor during 26 years at the Times. He moved there after nearly two decades at The Record in northern New Jersey, where he wrote an opinion column and edited the editorial page. At the Times, he ascended quickly, starting as a copy editor and eventually working on the weekend, OpEd, graphics, New Jersey and education desks before leading the Science Times section, from which he retired in 2014. END_OF_DOCUMENT_TOKEN_TO_BE_REPLACED

A New York Times article written by Bruce Japsen, an independent journalist writing for the Chicago News Co-Op, digs into Illinois’ recent challenges to the tax exemptions granted to a trio of prominent hospitals by virtue of their nonprofit status. The challenge, inspired in part by the state supreme court’s willingness to uphold the revocation of the nonprofit status of an Catholic hospital in Urbana last year, could expand to more than a dozen other institutions as the state scrambles to cover a looming revenue shortfall.

In its case, the state alleges that the hospitals aren’t providing a high enough proportion of charity care to fulfill the mission of a nonprofit.

All three of the hospitals the state is focusing on provided free and discounted medical care that ranged from 0.96 percent to 1.85 percent of patient-care revenue, according to the revenue department. The state also said that each one had been operating as a “for profit” business when the state’s Constitution says that “only charities are entitled to a tax exemption.”

The hospitals, for their part, point to the other benefits they provide the community, such as neonatal intensive care and burn units, that don’t always bolster their bottom lines. Advocates answer that paying taxes provides a community benefit as well, one that can readily be measured in dollars and cents. And Japsen found that paying those taxes doesn’t even seem to preclude the provision of charity care, especially at the parsimonious levels provided by the hospitals currently targeted by the state.

“The relative amounts of charity care provided by not-for-profit tax-exempts are not materially different from the amount provided by for-profit hospitals,” said Jim Unland, a longtime analyst of Illinois’ health care industry and president of the Health Capital Group, a consulting firm in Chicago. “This raises the issue of whether the tax-exempts are getting prejudicially favorable treatment.”

The three hospitals whose tax exemptions have been stripped by the state department of revenue plan to challenge the action in court, and state hospital organizations are gearing up for a lobbying push they hope will put their tax status on firmer ground.

Writing for The New York Times, Barry Meier and Janet Roberts analyzed a particularly tricky batch of federal reports detailing a variety of complaints with popular metal-on-metal hip replacements. They found that, since January, the FDA has received more complaints (5,000-plus) about the devices than it did, total, from 2007 to 2010.

While processing the data, the paper’s staff did their best to parse duplicate reports, international filings and other inconsistencies, but the reporters make it clear that the numbers are still best viewed in general terms. Even so, they demonstrate that the surge in complaints and lawsuits involving metal-on-metal hips — and the resulting mass defection of doctors who once implanted them — signals a broad shift in hip replacement surgery, one of the most common such procedures in the country. It also signals another blow for device manufacturers and patients, and a related windfall for the legal profession.

The vast majority of filings appear to reflect patients who have had an all-metal hip removed, or will soon undergo such a procedure because a device failed after only a few years; typically, replacement hips last 15 years or more.

The mounting complaints confirm what many experts have feared — that all-metal replacement hips are on a trajectory to become the biggest and most costly medical implant problem since Medtronic recalled a widely used heart device component in 2007. About 7,700 complaints have been filed in connection with that recall.
…
As problems and questions grow, most surgeons are abandoning the all-metal hips, saying they are unwilling to expose new patients to potential dangers when safer alternatives — mainly replacements that combine metal and plastic components — are available. Some researchers also fear that many all-metal hips suffer from a generic flaw. Current use of all metal devices has plummeted to about 5 percent of the market, though a few of the models are performing relatively well in select patients.

Writing for the Bay Citizen and The New York Times, Aaron Glantz brings a new, data-based take on the mental and physical toll the wars in Iraq and Afghanistan have taken on returning veterans, thanks to what he calls “an obscure government database called the Beneficiary Identification Records Locator Subsystem death file,” which he obtained via FOIA.

The database, which reveals a high rate of suicide and fatally risky behavior, lists all veterans who earned Veterans Affairs benefits since 1973.

Records from that database, provided to The Bay Citizen under the Freedom of Information Act, show that the VA is aware of 4,194 Iraq and Afghanistan veterans who died after leaving the military. More than half died within two years of discharge. Nearly 1,200 were receiving disability compensation for a mental health condition, the most common of which was post-traumatic stress disorder.

Names were redacted, but Glantz nonetheless managed to identify a number of veterans, including a troubled 26-year-old man who threw himself under a train just three days after being turned away by the VA. In the course of his investigation, Glantz has managed to fill in some of the gaps in the federal records, a process which has shown just how lacking the VA’s data can be.

The VA database does not include veterans who never applied for benefits or who were not receiving benefits at the time of their death, according to the agency. The VA said it also did not keep track of the cause of death.

When confronted with his agency’s shortcomings, a VA representative responded in a manner that belied his agency’s lack of focus on recordkeeping.

Jill Abramson, who will become executive editor of The New York Times in September, welcomed health journalists to AHCJ’s  2007 Urban Health Journalism Workshop. At the time (October 2007) she was the paper’s managing editor. In her brief talk, she discussed the importance of health journalism and the Times‘ expanding health coverage (MP3).
Listen to Abramson

She also was among the speakers discussing the future of science journalism at the Massachusetts Institute of Technology in April 2009.