Erica Hensley (@e_hensley) is a freelance journalist, based in Athens, Ga., specializing in mental health and social disparity stories.

View all posts by Erica Hensley → 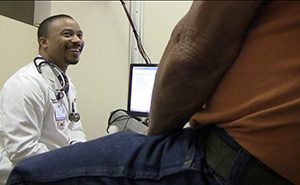 Athens, Ga., is a small city about 75 miles east of Atlanta. Older adults love its low cost of living, community-mindedness and proximity to a major urban area. What they don’t love, however, is the poor access to specialized senior health care.

Nearly 10 percent (11,830) of the city’s 120,000 residents are over age 65, but only three office-based geriatricians practice here. END_OF_DOCUMENT_TOKEN_TO_BE_REPLACED

After taking on continuing medical education and medical research, the Association of American Medical Colleges is now tackling conflicts of interest related to clinical care with its latest report, “In the Interest of Patients: Recommendations for Physician Financial Relationships and Clinical Decision Making” (46-page PDF). If you’re just looking for the Big Recommendations, the most salient of which are paraphrased below, fast forward to pages 24 and 25. Warning: They’re vague.

The AAMC committee that produced the report wrote that, while they focused on academic medicine, their recommendations could (and should) be applied to all of clinical medicine.

David Wolman, writing in Wired, chronicles the efforts of an Illinois physics professor, George Gollin (bio), to topple a $7 million fake-degree empire. It’s a fun story, and well worth a read, but the part that will most interest health journalists pops up at the very end: The professor who took down the operation that granted about 9,600 fake degrees used by everyone from schoolteachers to Bush White House staffers is now looking into what he thinks is a phony online medical school.

Wolman ends with this sketch of the professor at work:

He erases equations from a blackboard and scribbles a spider’s web of names, notes, and online sites all relating to an outfit called St. Luke School of Medicine, which he believes sells bogus medical degrees. “You get a real rise out of people when you talk about fake MDs,” he says.

The outfit in question, St. Luke School of Medicine, has now posted a message announcing it’s no longer accepting new students. However, if Gollin’s previous work (in his own words) is any indication, St. Luke is probably just one entry point into a universe of dubious medical degrees.

NOTE: As the Wired story makes clear, media outlets played a major role in the effort to expose the first diploma mill, especially by shaming public institutions into investigating and prosecuting the offenders. Reporters like The Spokesman-Review‘s Bill Morlin and Jim Camden helped connect the dots and expose the full reach of the story.

CNBC reports on the charter class of the University of Central Florida’s medical school and its unique model that allows students to attend tuition free.

Dr. Deborah German, dean of the medical school, says it admitted 41 students in the school’s first class and donors have pledged enough money to cover each student’s tuition and living expenses for all four years.

The report says that most medical students have racked up more than $150,000 of debt by the time they graduate. The report includes discussion about whether coming out of med school debt-free might encourage some to go into primary care rather than more lucrative specialties, such as plastic surgery.

German says that when medical students enter school, most of them do so with dreams and a sense of altruism but that by the end of medical school, they are starting families and the reality of debt sets in, perhaps pushing them away from going into primary care.

The donors, according to German, include hospitals, banks, law firms, women’s groups and all kinds of businesses. The money comes without strings; the students are not committed to go into a particular specialty or practice in a certain location.

In the American Medical Association’s American Medical News, Amy Lynn Sorrel reports on resolutions from the AMA’s annual meeting calling for an increase in medical school funding through scholarships and loans and for the use of other “innovative” debt-reduction programs.

According to Sorrel, students are leaving medical school with debt loads that sometimes top $200,000, burdens which some sources said push students away from longer residencies or lower-paying, underserved specializations and locations.

Delegates at the 2009 meeting called for innovative new measures, including “shortening the length of training for combined residency or dual-degree programs, easing loan repayment obligations and ensuring equitable tuition increases.”