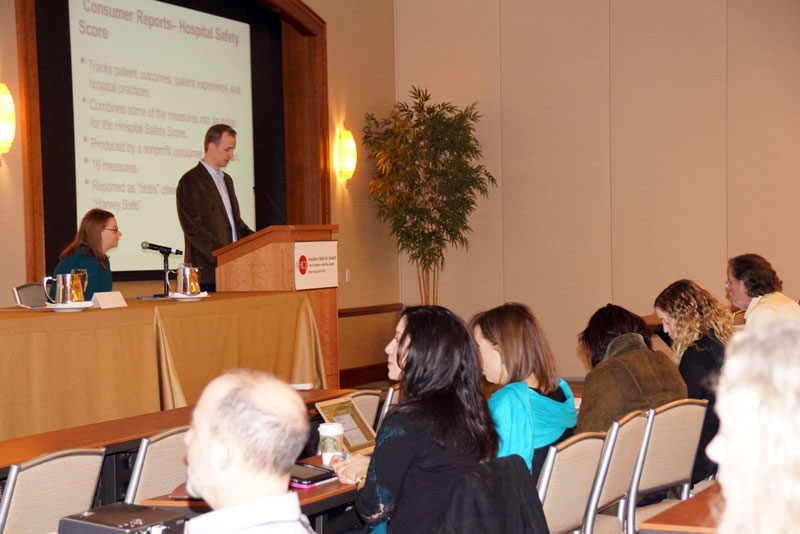 The pair outlined tips we can use to decipher information during a workshop, “Making sense of hospital ratings: A guide for reporters,” at Health Journalism 2013 in Boston. END_OF_DOCUMENT_TOKEN_TO_BE_REPLACED

Lisa Kenney knows all too well the grave danger posed by medical errors. While undergoing surgery in 1999, a medical error caused anesthetic to be injected into her bloodstream, rather than into the muscle. Kenney suffered cardiac complications and had to be revived by using a cardiac bypass machine.

Kenney now serves as president and executive director of Medically Induced Trauma Support Services Inc., an organization created in 2002 “to support healing and restore hope” to those impacted by unplanned medical outcomes, as Kenney was.

One of four speakers at a panel on medical errors at Health Journalism 2013, Kenney and others stressed the importance of putting precautions in place to ensure that standards are met to avoid medical errors or, at least, to make sure that errors are quickly and properly reported so that they are not repeated. END_OF_DOCUMENT_TOKEN_TO_BE_REPLACED

According to my mother, it sometimes isn’t enough to just say you’re sorry. In The Kansas City Star, Alan Bavley writes that, apparently, some physicians disagree. In particular, an organization called “Sorry Works!” thinks that apologies are powerful enough that they should provide doctors with immunity from some malpractice and disclosure rules. And, he writes, they’re campaigning to make it official.

…about five years ago, Sorry Works! changed from a coalition of doctors, lawyers, insurers and patient advocates. Now it’s a commercial consulting firm. Founder Doug Wojcieszak offers training to hospitals and doctors. And he has started crusading for new immunity for doctors who apologize.

According to Bavley, “Wojcieszak wants the (National Practitioner Data Bank) bank to keep malpractice payments secret in many cases when doctors make apologies and disclosures. Further, he wants doctors shielded from medical board discipline on these cases.”

Consumer’s Union and patient safety organizations have come out against the Sorry Works! campaign because, as Bavley writes, “proposal would give doctors who were going to settle a suit anyway an incentive to apologize just to keep it off their record.”

Under Sorry Works! three strikes rules, the vast majority of doctors (who face one or fewer malpractice suits during their career) would be able to stay clear of the data bank entirely, thus denying the public and medical boards access to crucial information that’s currently being made public.

William Heisel at ReportingOnHealth.org explains why Consumer’s Union and Robert Oshel, the designer of the National Practitioner Data Bank’s Public Use File are not in favor of the campaign .

The April issue of Health Affairs focuses on the quality of health care in the United States. Some highlights of the issue, which was sponsored by the Robert Wood Johnson Foundation:

Those of you who attended Health Journalism 2010 might be particularly interested in an update from Peter J. Pronovost, M.D., who was the keynote speaker at last year’s conference. In this issue of Health Affairs, Pronovost writes about the advances in reducing central line-associated bloodstream infections – which he discussed at last year’s talk.

Remember, AHCJ members receive free access to Health Affairs. If you haven’t already signed up for access, be sure you take advantage of that benefit.

Writing for the Las Vegas Sun, reporter Marshall Allen put a fitting cap on an award-winning investigative run at the paper with a story rounding up the state’s first steps toward transparency in medical error reporting. Through the lens of former Beth Israel Deaconess chief, transparency pioneer and blogger Paul Levy, Allen demonstrates just how much transparency in Nevada could benefit both hospitals and their patients. It’s potential that was created, in no small part, through the reporting that Allen and Alex Richards have done.

Over the course of the Sun’s two-year investigation, most Las Vegas hospitals refused to discuss patient safety issues. The Nevada Hospital Association has since 2002 lobbied against mandated public reporting of patient harm. But since the Sun’s investigation, and with legislation pending, the association has said it will begin posting patient injury and infection data on its hospital quality website.

Throughout the piece, Allen paints a sunny picture of a more transparent future, and uses examples from Massachusetts to dissolve any reservations readers might have.

Dr. Tejal Gandhi, Partners’ director of patient safety, said at first there was panic over posting on the hospitals’ websites the infections and injuries suffered by patients. People worried there would be a media frenzy or a rise in malpractice lawsuits, she said.

When the information became public, in 2009, The Boston Globe published one story but there was little other reaction, she said.

The hospitals have seen no increase in malpractice lawsuits. But it has brought a new focus on reducing certain infections and injuries, including the formation of task forces and establishment of standardized safety protocols.

Allen, who recently took a job with ProPublica, completed part of this series while on an AHCJ Media Fellowship on Health Performance, supported by the Commonwealth Fund. The series, which was reported with Richards, won a 2010 Award for Excellence in Health Care Journalism, the investigative reporting category in the 2010 Scripps Howard Awards, best in show for the print category of the National Headliner Awards and the 2011 Goldsmith Prize for Investigative Reporting.