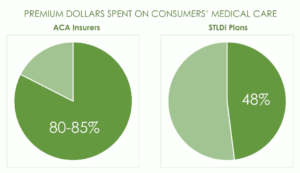 Source: “Shortchanged: How the Trump Administration’s Expansion of Junk Short-Term Health Insurance Plans is Putting Americans at Risk,” U.S. House of Representatives, Committee on Energy and Commerce, Democratic staff report, June 2020.Short-term limited duration insurance plans spend less than half of consumers’ premiums on medical care, while insurance plans that comply with the rules of the Affordable Care Act spend 80 percent to 85 percent of premium income on medical care, according to a recent congressional staff report.

Short-term, limited-duration insurance plans threaten the health and financial well-being of American families, according to a recent staff report from Congressional Democrats on the Committee on Energy and Commerce (E&C). The report is a result of an investigation that staff conducted into nine health insurers, including UnitedHealth Group and Anthem, and five insurance company brokers that sell these plans for insurers.

“These plans are simply a bad deal for consumers, and oftentimes leave patients who purchase them saddled with thousands of dollars in medical debt,” according to “Shortchanged: How the Trump Administration’s Expansion of Junk Short-Term Health Insurance Plans is Putting Americans at Risk.” The committee’s investigation into how these plans operate outlines what the report calls “the deeply concerning industry practices” of STLDI plans and the insurance brokers who sell them. END_OF_DOCUMENT_TOKEN_TO_BE_REPLACED 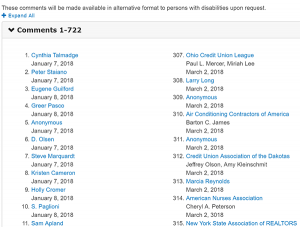 What can journalists learn from reading the comments that health care professionals send to federal agencies that propose new rules for health insurers? The short answer is: quite a lot.

Last year, Noam N. Levey poured over about 10,000 comments from health care provider organizations and other groups submitted to federal agencies about their concerns regarding the Trump Administration’s plans to revise the rules for short-term health insurance plans and association health plans. What Levey found was almost unanimous opposition to both proposals. In a new tip sheet, Levey explained what he found while reviewing the comments on both proposals and offered ideas that may be useful for other journalists considering doing a similar review. END_OF_DOCUMENT_TOKEN_TO_BE_REPLACED