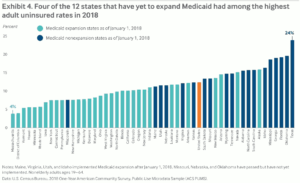 In addition to those sad statistics, the fund’s researchers show in the 2020 Scorecard on State Health System Performance that racial and ethnic disparities were getting worse as well. END_OF_DOCUMENT_TOKEN_TO_BE_REPLACED

Daily Kos contributor JDWolverton posts  his critical open letter to Dr. Nancy Snyderman, the host of MSNBC’s new midday health show, and pleads for her to cover health care reform from the perspective of the average consumer.

Wolverton also says she does not “quote peer reviewed sources,” has not revealed to viewers that the frequently quoted Lewin Group is owned by United HealthCare, and has issues with how she describes the current U.S. health care system and the options for reform.

The 1,000-plus word letter ends with the request that Snyderman “Do a real health care oriented show that does more than fluff pieces” and has four specific ideas for improving the show.

Snyderman previously worked for ABC, which suspended her for a week after she made a radio commercial for Tylenol. She later left ABC to become vice president of medical affairs for Johnson & Johnson – maker of Tylenol.