View all posts by Antonio Flores-Lobos →

What brought you to the AHCJ conference?
The desire of getting more and more training on health issues, in order to inform better our growing Hispanic community in South Florida. The need of having more info on health reform, there is little to none specifics about it, at least in the Sunshine State!

Which has been one of your favorite panels … and why?
Health reform, the one with the governor of Massachusetts  Because he explained in a good and simple way what was working for this state and how people and public health in general can benefit from having health insurance.

What are you taking from the conference?
More knowledge, many story ideas, the energy shared by many in terms of willing to help out with good health articles, the grace of having met many colleagues from all USA. And I was happy to see also the presence of many Hispanic journalists. And how we all want to learn and succeed in helping out our communities.

Are you planning any sightseeing while in Boston?
I have done it already! I am lucky enough to have a friend from the university I studied at living here, and she made me literally “spin” around Boston in a couple of nights. I especially enjoyed the opportunity of going to Harvard University. I hope though tonight I have the opportunity of going out with a group of new friends I have met here at the conference.

View all posts by Desiree Robinson → 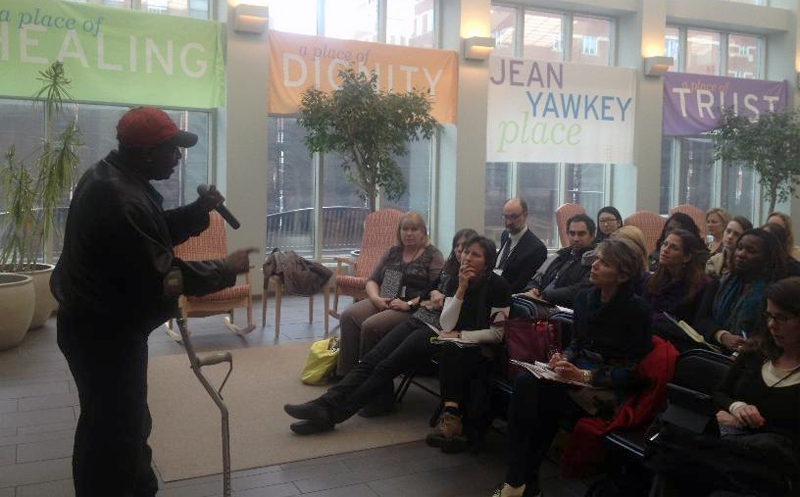 Photo by Desiree RobinsonLarry Adams, patient and chairman of the consumer advisory board of the Boston Healthcare for Homeless Program, addresses visiting AHCJ members.

“I’ve been locked up in mental institutions and prison. If it hadn’t been for the team here, I wouldn’t be talking to you right now. When I’m feeling depressed, I pick up the phone and I call my psychiatrist and talk.”

These are the heartfelt sentiments of Larry Adams, patient and chairman of the consumer advisory board of the Boston Healthcare for Homeless Program (BHCHP). First of its kind in the nation, BHCHP serves 12,000 patients through over 60,000 visits a year in more than 80 locations. For more than 25 years their mission has been to provide or assure access to the highest quality health care for all homeless men, women, transgender and children in the greater Boston area.

As part of one of the field trips offered at Health Journalism 2013, journalists toured the bright and warm facility where health care teams mobilize to serve the most underserved of Boston’s residents. END_OF_DOCUMENT_TOKEN_TO_BE_REPLACED

View all posts by Marcie Fraser →

According to the CDC, about 10 percent of women age 44 and younger, or 6.7 million, have trouble getting pregnant or staying pregnant. Women account for a third of infertility problems and men for another third.

In a session at Health Journalism 2013, Alice D. Domar, Ph.D., executive director of the Domar Center for Mind/Body Health said, “There is no other medical condition that has a negative impact on so many areas of a person’s life like infertility.” END_OF_DOCUMENT_TOKEN_TO_BE_REPLACED

Yurina Melara Valiulis is a public health reporter at La Opinion in Los Angeles. She is attending Health Journalism 2013 on an AHCJ-Ethnic Media Health Journalism Fellowship, which is supported by the Leona M. & Harry B. Helmsley Charitable Trust.

What brought you to the AHCJ conference?
We don’t have such a kind of conference in Hong Kong and that’s why I am here, seventh in a row, to learn from each other and to hear experts’ sharing firsthand.

Which has been one of your favorite panels so far, and why?
The “Freelance: Maintaining quality under pressure” one, definitely! Loads of useful tips and tools suggested by the panelists, and audience as well.

If you could add a panel, what would it be?
Haven’t thought about it yet.

Are you planning any sightseeing while in Boston?
Medical museums are definitely on my list.  I found this article in Covering Health really useful.  My husband arrives in Boston next Monday.  I am looking forward to going with him although he is less enthusiastic about it!

View all posts by Julie Andrews → 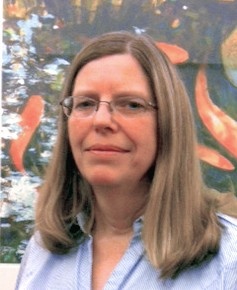 What you do:
I was doing the Nature Boston blog. That’s now been archived. I teach part-time at Boston University and am getting back on track freelancing. The last piece I did was not health care but about the people who care for the roses in the public garden. I sort of fell into that.

Favorite panels:
At panels, here’s what’s been happening to me. I’ll go to a session, think I know all the stuff already and shouldn’t come back to the meeting next time. Then, towards the end, they’ll get into something new to me. Conversation churns up the new stuff.

This last freelance panel was very good. I’ve been to a lot of the freelance panels. They’ve been helpful to me. It was the discussion with the people in the audience, knowing what tools they’ve been using. How they survive the lean times. At first you’re thinking, this person is so successful. This doesn’t apply to me – I’m struggling, making $100 a piece, or $75 a post. But then you realize they’ve all been there, too. A part of me thinks they’re the winners. We’re the losers. But as it developed, I saw we were all on different points of the same continuum.

Best tips:
Things that answered my questions were discussions on conflict of interest for freelancers. Disclosure. Who can you write for, who should you not write for. To hear how different freelancers handle conflicts of interest among their clients.

Networking is one of the key things at this conference. It forced me to network, which is something I don’t do naturally.

“You can maintain that 60 miles per hour but you’re going to wear out your car,” Pitts said, noting that chronic stress produces increased inflammation that is linked to heart disease, strokes and autoimmune disorders. END_OF_DOCUMENT_TOKEN_TO_BE_REPLACED