View all posts by Randy Dotinga → 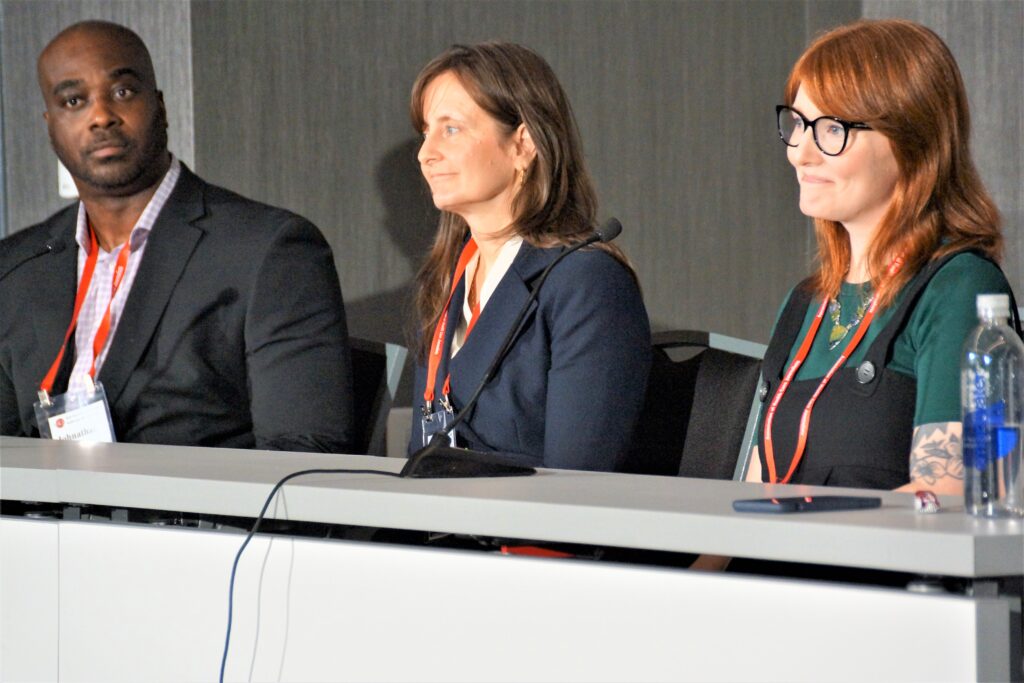 Photo: Erica TricaricoJonathan Davis, executive director of the Baltimore Crisis Response; Shannon Frattaroli, a professor at the Johns Hopkins Bloomberg School of Public Health; Veronica Pear, an assistant professor at University of California-Davis, during the “‘Red Flag’ Laws: The use of court orders to reduce gun violence” session.

In recent years, multiple states have made headlines for approving “red flag” laws or extreme risk projections orders, which allow judges to order the confiscation of firearms from people considered to be dangerous to themselves or others.

But too often, that’s where the reporting stops — right after a vote in a legislature and a governor’s signature. Two professors who study the measures urge journalists to find news by following up to see what happened next.

“At this point, we’re looking at critical implementation questions: Are these [laws] being used? Who’s using them? And in what kinds of circumstances are they being used?” asked Shannon Frattaroli, a professor who’s studied firearm violence at the Johns Hopkins Bloomberg School of Public Health. She presented at the Reporting on Violence as a Public Health Issue: An AHCJ Summit on Thursday, Oct. 27, in Chicago.

As reporters and researchers have discovered, red flag laws are barely used despite hoopla over their potential as a useful tool to prevent gun violence. There’s no firm evidence — yet — that they actually keep violent people from shooting others. There’s less consensus about the laws among African Americans because of the possible potential for discrimination in their use.

Nineteen states and the District of Columbia have passed red flag laws since Connecticut led the way in 1999. That number may grow. Last summer, Congress passed landmark firearm legislation that provides support to states to enact and enforce these laws.

In terms of benefits, several studies suggest that red flag laws have prevented suicides, although it’s difficult to know for sure, said Veronica Pear, an assistant professor at the University of California-Davis who’s studied red flag laws. As she noted at the AHCJ summit, her research team examined red flag cases in California from 2016-2018, and found that none of the 82 people subjected to the restraining orders who threatened self-harm went on to kill themselves through August 2020.

How can reporters examine red flag laws? One strategy is to request public documents and see whether the law is being deployed.

The Associated Press took this approach and reported in September 2022 that the laws “were used to remove firearms from people 15,049 times since 2020, fewer than 10 per 100,000 adult residents. Experts called that woefully low and not nearly enough to make a dent in gun violence, considering the millions of firearms in circulation and countless potential warning signs law enforcement officers encounter from gun owners every day.”

If your local community isn’t taking advantage of a statewide red flag law, why not? According to Pear, widespread use of the law often hinges on whether someone in power — such as a local elected prosecutor — champions its use and works with law enforcement and judges on procedures.

Reporters can also explore who’s being targeted by the laws and why. “At this point, I have personally read more than 1,000 of these cases,” Frattaroli said. The evidence supporting the removal of firearms, she added, is “compelling.”

Reporters could also look for signs of racial disparities. There were signs in the California data that Blacks and Hispanics were more likely than Whites to be arrested when red-flag restraining orders were served, Pear said. But the gap shrunk when researchers only looked at targets who threatened harm to others.

She added that ethnic minorities may be at a disadvantage if they fight back in court. Since the restraining orders are civil matters, targets are not entitled to legal representation if they can’t afford an attorney, she said.

There’s another kind of data that can be useful for journalists to explore: the findings from a survey conducted by Pear’s team. The researchers surveyed Californians and found that most weren’t familiar with the state’s red flag law. When they were told about it, she said, most respondents across ethnic groups supported the law and would pursue a restraining order if appropriate.

However, she said, “we did find substantially less support for the law and willingness to use it among Black participants in the survey.” Some said they didn’t trust the system to be fair.

In the big picture, Frattaroli said, it’s crucial to follow up after laws pass. “The real work begins once that bill is signed into law.”