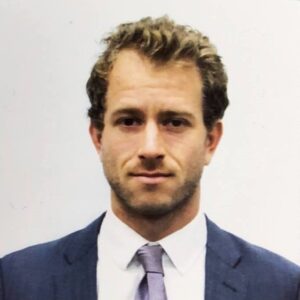 When journalist Ted Alcorn visited an alcohol detox center in Gallup, New Mexico, he had little idea his reporting on the impact of alcohol on his state would grow into a multi-part, 21,000-words-and-growing series digging into why New Mexico residents die from drinking at much higher rates than those in other states. Alcorn’s remarkable package, Blind Drunk, was published by New Mexico In Depth in July 2022. Alcorn is an AHCJ Health Care Performance fellow and covered this story as a part of the fellowship program.

A reporter with credits at The New York Times and other national publications who also lectures at Columbia University’s Mailman School of Public Health and NYU’s Wagner School of Public Service, Alcorn shared with AHCJ how his project came about and how he waded through the enormous amount of research that went into it.

This conversation has been edited for clarity and brevity.

What led you to begin working on this story, and did you have a sense of how much research and data would be involved?

I often write for national papers, but I also regularly contribute reporting to the nonprofit investigative outlet New Mexico In Depth. An editor there asked me if I would look into the role alcohol had played in COVID-19 deaths in the state. I had only done a little digging when I learned that New Mexico has by far and away the highest alcohol-related death rate in the country, and that many of the commonly held perceptions about drinking’s harms in the state — for example, that DWI is a leading factor — are false. I pitched the idea of doing a multi-part series and then was fortunate to be awarded a few grants to enable a longer-term project. We knew it would be a six- to nine-month project, but that still didn’t prepare me for how laborious it would be to carry it to the finish line.

Where did you begin in looking up the medical studies research you would ultimately need for the story? Did you have a strategy for how to look up studies and ensure you were finding ones that were representative and/or that you weren’t inadvertently cherry-picking studies?

As is typical with my reporting, I try to obtain primary source data because I don’t want to depend on conventional wisdom to come to my own conclusions. This was no exception. I ultimately gathered and analyzed data from more than a dozen local, state, and federal agencies. I also read widely in the scientific literature, either studies that were recommended by sources or that were cited in other works or that came up organically in my searches. I teach graduate courses in public health and have free academic access to the various scientific citation databases, which makes this a bit easier for me.

When I reference studies in the reporting, I often lean on meta-analyses or other works that summarize the findings of a body of research rather than any single study. At times during my reporting, I would share studies back with sources to get their opinions about them, particularly with members of the alcohol industry who might want a chance to dispute some of the findings.

Did you have a system for organizing the findings so you could compare them and easily recall them when you needed them?

I annotate studies as I review them using a PDF reader, which makes it easier to go back and pull key findings. I also relabel and organize all the studies I download by year, which I find makes it easier for me to navigate back to studies later when I need to review them.

What did you discover about the science on why disparities existed for alcohol deaths among Native Americans, and how did you handle the gaps in the evidence?

There’s a long legacy of shoddy science and superficial reporting about Native peoples’ substance use. My mentor in graduate school, Allison Barlow, runs Johns Hopkins’s Center for Indigenous Health, and I also sought other people who have devoted their careers to this field, interviewed them, and asked them to recommend studies to me. When I found the experts divided — for example, on whether Native people have a genetic predisposition to alcohol dependence or diseases (or whether the social determinants of health play more of a role) — I would dialogue with researchers and ask them to critique one another’s observations.

I also talked to practitioners working in and around the Navajo Nation, the focus of one of my stories. I was explicit about acknowledging the past missteps of scientists and reporters, and I took care to stay within the boundaries of what I knew with certainty. You can read more about my process here: Topics in health: lessons from the field – How I sought to avoid the mistakes of the past in reporting on alcohol deaths in New Mexico.”

How did you begin your research into policy, including studies on alcohol taxes’ impact on drinking and alcohol-related harms? How did you determine which studies were most reliable and helpful in your reporting?

Through word searches in citation databases, it was fairly simple to identify evaluations of alcohol taxes, and to pick out the most prolific authors in the field. I read many of the studies and interviewed the key researchers. When industry produced an outlying study that found taxes were not associated with reductions in alcohol use among heavy drinkers, I asked the researchers for their thoughts, and they provided a compelling critique of that study’s methods. Since no single study encapsulated the whole, I referenced a number in my reporting.

Can you explain what you learned about the difference between alcohol-induced and alcohol-attributed deaths and what lessons lay in that distinction for other journalists?

Death certificates written by medical examiners and coroners are among our best documentation of alcohol’s harms, but although drinking is an underlying cause of death for many people, it isn’t always easy to distinguish that. ‘Alcohol-induced’ deaths are those with a clear and definitive link to alcohol, and then the CDC uses a complex formula to estimate the number of additional deaths — whether homicides and suicides or falls or cancers — where alcohol is known to play a role in some share. Including this group, the total toll of drinking is known as ‘alcohol-attributable’ deaths. Whereas it’s simpler and more definitive to refer to alcohol-induced deaths, at times I found it necessary to refer to the larger group of alcohol-attributable deaths, so I didn’t inadvertently undersell readers on the gravity of the consequences of excessive drinking.

What advice would you give to other journalists who may begin a similar project?

Alcohol is among the top causes of preventable death in the U.S., yet it receives very little attention from journalists. This poses a huge untapped opportunity, whether your beat is health or safety or culture or politics. New Mexico In Depth and I hosted a webinar for interested journalists on how to tackle this issue in their state, and a recording is online. (View recording).