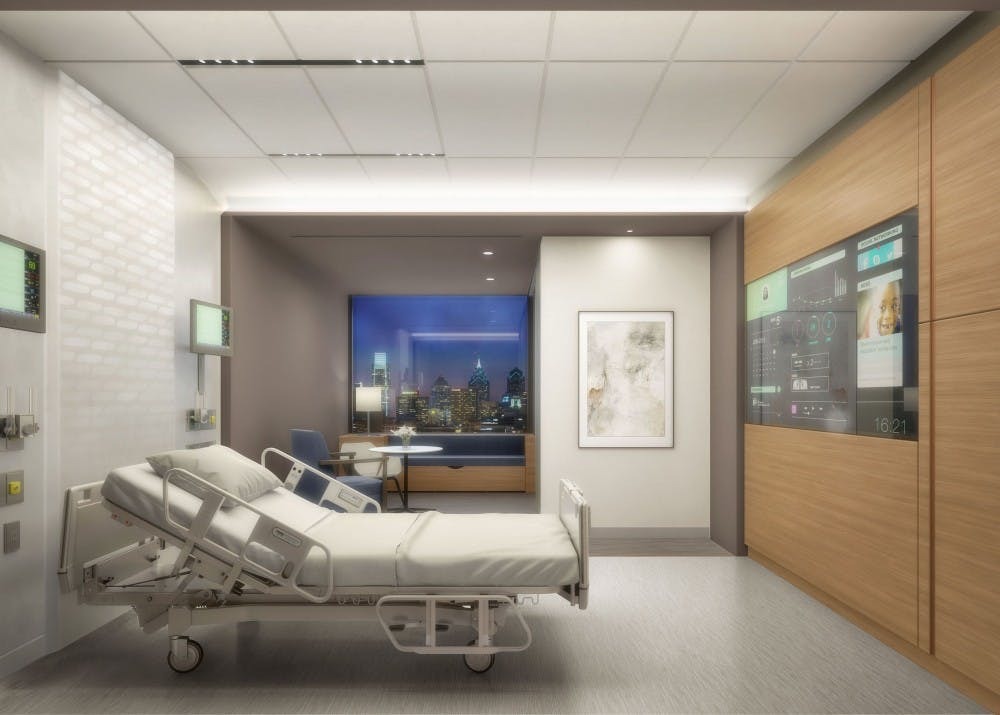 Image courtesy of the Hospital of the University of Pennsylvania.

When the Hospital of the University of Pennsylvania opened its 17-story, $1.6 billion Pavilion building last October, it marked the culmination of a several-year plan to create a patient-centered building built for the future of medicine. Looking at the facility design can provide journalists with a sense of where new hospital construction is headed and provide plenty of ideas for feature stories.

In the largest capital project in Philadelphia hospital’s history, designers called on features used by Disney to hide from public view core services like linen and trash chutes, and reserve the outside of the building and views of downtown for patients and families, said John Donohue, Penn Medicine’s vice president of entity services, during a March presentation at HIMSS22, the Health Information and Management Systems Society’s annual meeting.

They also included a new main telecommunications equipment center, 31,000 network ports, and almost 900 Wi-Fi access points, including some just outside the building where staff congregates during breaks in nice weather.

Each of the 504 patient rooms has a 75” monitor that integrates functions like television viewing and weather with information about the patient’s care plan and names and photos of care team members. Through an integrated pillow speaker, patients can use voice commands to call for a nurse; control the room’s lighting, window shades and temperature; turn on or off privacy glass on side of the room facing the hallway, and work the television or play music. Care providers wear badges that wirelessly transmit their photos and positions to the patient’s digital board. Rooms can be converted to serve as either intensive care unit beds or regular patient rooms as needs change. During the next phase of design, building engineers will incorporate clinical imaging so doctors can pull up patient scans on the monitors in patient rooms when discussing their care.

Following similar footsteps, Houston Methodist also broke ground on a 400-bed hospital in Cypress, Texas, designed to be a smart hospital of the future. Scheduled to open in the first quarter of 2025, the building will incorporate elements to transform safety and quality through digital innovation, said Debra Sukin, M.H.A., Ph.D., regional senior vice president for Houston Methodist, in an interview with AHCJ.

Patients want to be known when they come into the hospital, Sukin said. They don’t want to have to stop and spend 20-30 minutes filling out forms. They also want predictability, such as being able to know their co-payments. New digital applications will allow patients to schedule appointments, fill out forms and check billing status without having to spend as much time on the phone, Sukin said. Practitioners will also have the ability to easily schedule operating room or clinic time.

Not every element in health care can be made 100% virtual or digital, Sukin cautioned. Therefore, designers are focused on building out the so-called “phygital” (physical and digital) environment. Smart patient rooms will be wired for cameras and voice-controlled functions. They’ll have tablets or other functions capable of video visits, entertainment and access to the hospital’s spiritual care library. Artificial intelligence-powered tools will help with documentation or analyzing data. Robots will play a role in the operating rooms and food prep areas and possibly extend to the labs or other locations. Cafeteria services will be extended into the night shift by having grab-and-go stations for prepared food with barcode technology through which employees can check out using Apple Pay or swipe their badge for a deduction on their paycheck.

In other changes, hospital locations for treatment and monitoring also have been expanding. The Mayo Clinic in Florida began its Care Hotel model in July 2020 to offer patients an environment outside of the hospital where they can receive both in-person and virtual care following a low-risk surgery or procedure. The hotel is staffed by a registered nurse from 7:00 a.m. to 7:00 p.m. for vital sign assessment and dressing changes. Patients are monitored remotely during the remaining hours. In a survey of 102 patients who tried the hotel between July 2020 and June 2021, 87% reported having a positive experience and 94% said they were likely to recommend the program to others. These results were published in the Annals of Medicine and Surgery.

The model is part of a multi-pronged hospital-at-home effort by Mayo, according to an article in Healthcare IT Today. Additional services to be provided in patient homes in partnership with a tech vendor include infusions, skilled nursing, medications, labs and imaging, behavioral health and rehabilitation. The effort is part of a larger initiative called Mayo Clinic Platform, which seeks ways to leverage technologies such as artificial intelligence, connected health and natural language processing, the article noted.

Some hospitals have taken hospitality a step further, adding patient lounges to nearby airports. Knowing that between 50-60 patient families fly in to the Memphis International Airport for treatment at St. Jude Children’s Research Hospital each week, the local airport authority gifted a private lounge for St. Jude patients and families in the airport’s new concourse, according to a recent news release. Staffed by employees, the lounge, which opened on March 24, features seating areas with charging stations, board games and books; a kitchenette with coffee, tea and snacks; and a monitor that provides up-to-date flight status information. Free transportation to gates is available.

The Cleveland Clinic is looking to follow suit, opening a lounge for patients at Cleveland Hopkins International Airport. Clinic staff proposed a plan to renovate a 480-square-foot space inside the airport to offer concierge and hospitality services for patients and help make travel arrangements, Cleveland.com reported. About 3,000 patients fly to the airport for treatment at the clinic each year, the article noted. If approved, the clinic would lease the space for at least three years. The Mayo Clinic in Minnesota has a similar space at Rochester International Airport where patients can visit a help desk providing appointment and transportation information.