Want to know why little gets done when the U.S. Congress takes up proposals to control drug prices? One recent headline tells the story in nine words.

Committee Chairman Ron Wyden, D-Oregon, has called the hearing “an opportunity for members to discuss how high drug prices have impacted seniors and families in their states and identify solutions.” But, as Florko noted, lawmakers have had more than a dozen hearings on high drug prices over the past three years and failed to make prescription drugs more affordable.

In February 2019, for example, the Finance Committee called executives from seven drug companies —AbbVie, AstraZeneca, Bristol Myers Squibb, Johnson & Johnson, Merck, Pfizer and Sanofi — to explain why their drugs were priced so high and why the companies tended to raise prices annually.

But more than three years later, none of those companies has changed its ways, he wrote. What’s more, he added, the list prices for almost all top-selling medications from those companies have increased since the hearing in 2019.

Using data from the drug-pricing site GoodRx, Florko showed that Pfizer’s breast cancer drug Ibrance (palbociclib) costs $2,117 more per month than it did in February 2019 and that the price of a two-vial pack of Bristol Myers Squibb’s immunotherapy Opdivo (nivolumab) rose more than $1,000 since then.

He also noted that the Kaiser Family Foundation published a report on Feb. 25, “Prices Increased Faster Than Inflation for Half of all Drugs Covered by Medicare in 2020.” In that report, the foundation’s researchers showed that the public supports legislation to reduce prescription drug prices, especially while inflation is rising. 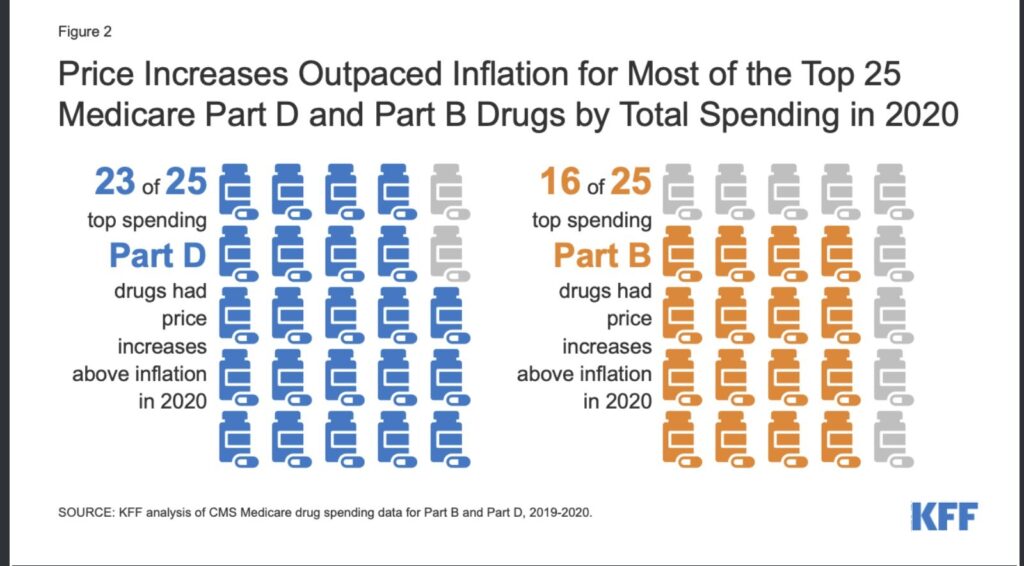 The foundation added that the U.S. House of Representatives passed its version of H.R. 5376, the Build Back Better Act (BBBA) on Nov. 19, but that bill is stalled in the Senate. If passed, it would allow the federal government to negotiate drug prices for Medicare, cap out-of-pocket drug spending for beneficiaries who have Medicare Part D plans and limit what patients would pay out of pocket for insulin each month. Also, that bill would require drug companies to pay rebates to the federal government when drug prices exceed the rate of inflation for Medicare and commercial health insurers. This KFF report has more details: “Explaining the Prescription Drug Provisions in the Build Back Better Act.”

The second angle is that Americans have long paid far more for prescription drugs than those who live in other developed nations pay. For example, see this report, “How do prescription drug costs in the United States compare to other countries?,” from the Peterson Center on Healthcare and the Kaiser Family Foundation.

Health care journalists need to hammer these price discrepancies because most Americans don’t know that what we spend for prescription drugs is grossly abnormal compared with what citizens pay in other developed nations.

Third, Florko reported that during the hearing on drug prices in 2019, the drug company executives insisted that a crucial factor causing drug prices to rise was pressure on pharmaceutical manufacturers to pay higher rebates to middlemen in the U.S. drug supply chain. “They urged lawmakers — again and again — to either end rebates entirely or mandate that drug middlemen share those rebates directly with consumers at the pharmacy counter,” he wrote. Drugmakers pay rebates to get their medications on the preferred lists of drugs, called formularies, that pharmacy benefit managers and insurers use.

Drug rebates are a complex topic for journalists to cover, but they are a critical factor in understanding the role that health insurers, pharmacy benefit managers and other companies play in driving up what consumers pay at the pharmacy counter. Florko cited a report from the consulting company Berkeley Research Group that the Pharmaceutical Research and Manufacturers of America funded. PhRMA is the drug-makers’ trade and lobbying group.

That Berkeley Research Group report, “The Pharmaceutical Supply Chain, 2013–2020,” showed that in 2020, manufacturers retained 49.5% of the total spent on brand-name drugs and that middlemen in the supply chain — health insurers, hospitals, PBMs, pharmacies and others — collected the majority of total spending on brand-name drugs.

Health care journalists may recall that during an AHCJ webcast on Feb. 16, we covered some of these issues as they relate to the cost of insulin, “Reporting on the Care and Costs of Reporting on Diabetes.” During that webcast, Karen Van Nuys, Ph.D., explained her research on how middlemen drive up the cost of prescription drugs. Van Nuys is the executive director of the Value of Life Sciences Innovation Project at the USC Schaeffer Center.

In November, she and her colleagues wrote this report: “Middlemen, Not Drug Companies, Are Pushing Up Insulin Prices, and Congress Doesn’t Have the Right Plan to Fight Back.” Their research was published in JAMA Health Form, “Estimation of the Share of Net Expenditures on Insulin Captured by US Manufacturers, Wholesalers, Pharmacy Benefit Managers, Pharmacies, and Health Plans From 2014 to 2018.”

Another speaker on that webcast was Ted Doolittle, Connecticut’s health care advocate. On Twitter (@teddoolittle2), often explains how the state’s co-payment cap on insulin limits what patients pay out of pocket for insulin. It does not cap the price of insulin. Therefore, if you report that co-pay caps limit the price of insulin or any medication, he may correct you.

The fifth angle for journalists covering drug-price reform may be the most obvious: follow the money, as Jonathan O’Connell and Anu Narayanswamy did for The Washington Post on March 12. In an article, “Lobbying broke all-time mark in 2021 amid flurry of government spending,” they reported that the pandemic fueled a frenzy of spending among lobbyists that totaled a record $3.7 billion.

Every year, one of the biggest lobbying groups in Washington, D.C., is the pharmaceutical industry, which boosted spending last year to fight drug-price controls and other measures, they wrote. PhRMA spent $30 million last year, a 17% increase from what they spent in 2020, they added.