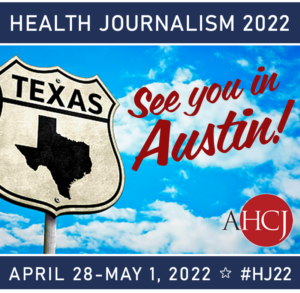 We were pretty excited when AHCJ chose Austin as the location for its 2020 conference. Little did we know what was in store (thanks, COVID). Now that vaccines are widely available, we’re thrilled we have a chance to share one of Texas’s most dynamic cities with our colleagues.

But to do that, you have to join us. (Registration is officially open.)

We want you to hear not only from the smart people AHCJ has invited but also experience firsthand what a slice of Texas is really like, no matter what you’ve heard about us Texans. (Any claims of amazing food and great music, though, are true.)

A few things you may not know.

Austin, the state capital, has been one of the country’s fastest-growing cities for decades and is home to innovative enterprises such as Dell Computers and the flagship campus of the University of Texas, one of the nation’s leading — and largest — research and learning institutions. Did you know we have COVID vaccines because UT-Austin molecular biologist Jason McLellan, recently named Texas Inventor of the Year, and his team figured out how to engineer the spike protein so it could be used in a vaccine?

We are keenly aware of the troubling reasons Texas is in the spotlight. This state, one of the most populous in the nation, has serious health inequities. We have one of the worst maternal mortality rates in the country, and we’re not so great at preventing infant mortality either. One in five children here lacks health insurance — the highest rate in the country, and growing.

Because of these reasons, because our issues are not ours alone, and because we are constantly challenged by misinformation and disinformation, we need dogged journalists to learn as much as they can about the health trends and breakthroughs taking place in Texas. At the end of the day, our work informs readers and helps hold policymakers, health researchers, doctors and others in the health care system accountable for what they do and do not do.

Come to Austin. We’ll make sure you hear from diverse speakers on the most important health issues of our time. And we’ll get to see each other for the first time in three years. Plus, you’ll be able to confirm that the rumors about our friendliness and hospitality are not an exaggeration.

So join us for a few days over tacos or barbecue, y’all. You won’t regret it!

— Tara Haelle, independent journalist based in Dallas-Fort Worth

— Charlotte Huff, independent journalist based in Fort Worth

2 thoughts on “A letter from Austin: Why you should join us”