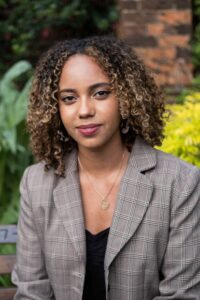 Medical photographs are crucial to documenting disease in textbooks, journals and training medical students. But if inaccurate, physicians won’t get a clear enough picture of what disease looks like in people with different skin tones, which could impact health outcomes, wrote Georgina Gonzalez in her recent article published in The Verge.com, “Medical Photography is Failing Patients with Darker Skin.” The piece includes information about a recent journal article in which a dermatologist offers guidance for photographing skin conditions in people of color and describes how bias has been built into photography for decades.

It was the first freelance pitch for Gonzalez, who works full-time as a news reporter for Becker’s Hospital Review. In a new “How I Did It,” she shares the story behind the story and her advice to AHCJ members writing about technology. (Responses have been lightly edited and condensed.)

How did you get the idea for this story?

I was an intern at NBC and was searching for news when I came across a cover photo that a news organization had posted of [businessman and former presidential candidate] Andrew Yang. People were complaining on Twitter about the photo and the color wash because he looked very yellow. It led to numerous racist stereotypes about Asians during the height of anti-Asian hate happening in the city. The organization apologized, but I remember seeing people in the thread saying, “Oh, it was the filter,” or “It’s because it was taken on a film camera.” Then, I became interested in how technology can produce an image that’s not representative, especially if it leans into racist tropes.

I started doing some research on the topic. There’s so much written about it, especially by Lorna Roth, Ph.D., who has written about how film technology was inherently biased in the sense that it never centered around people of color. I also looked more on the aesthetic side. There seems to be a lot of information from Black cinematographers in Hollywood. I also learned how darker-skinned people have been misrepresented on magazine covers and ways to fight this or acknowledge this bias by understanding your lighting, for example. During my research, I came across Dr. Jenna Lester’s piece, a guide for photographing darker skin in dermatology. I was like, ‘How does that affect patient outcomes and health?’ So, I got down this rabbit hole from there about bias in medical photography.

How did pitch your article to The Verge?

I wrote this piece as part of a summer project for the National Association of Science Writers. They had an amazing mentoring program where they paired students and recent graduates with science writer members. I was paired up with freelance writer Alexandra Witze. She was amazing and helped me formulate and re-angle this piece. She also guided me on how to pitch it because I’d never pitched before. We came up with a short list of organizations that might be interested in something that intersects with tech, race, science, and medicine, and The Verge was a good fit.

Besides speaking with Dr. Lester, you researched the interesting history of photography and skin tone. What type of sources did you cull for that information?

I got in touch with Lorna Roth, a communications studies professor from Concordia University, one of the only people who’s done in-depth work on this. There was a piece in NPR about the “Shirley” card (cards used to help photography labs ensure color, hue and tone of images, where the default was whiteness). There was also a piece in The New York Times about how it feels to be photographed badly and how it affects self-esteem. And there are a lot of cinematographers who have spoken about their tips and methods. Someone from the HBO show “Insecure” talked about how to use certain types of moisturizer on Black actors to make their skin pop. Another cinematographer who filmed the movie “Arrival” had a YouTube video that addressed the different types of backlighting and diffusing he uses to bring out different skin tones on camera. There was a lot of information available on the aesthetic side of photography but less on the medical front. So, that’s when I turned to medical experts and researchers.

What feedback have you received from readers?

I sent it [the article] to the people I interviewed and [Dr. Lester] emailed me back saying that she thought it was an angle that’s not spoken about much. As I mentioned, people talk about the aesthetic side of photography in darker-skinned people and health disparities, but there’s not much talk about the overlap. I don’t think medical photography is very well understood or known about [among the general public]. Christye Sisson, who I interviewed for the piece, runs the only graduate department that does medical photography in the nation. I think many clinical people or medical assistants will be taking these photographs instead of professionals, which is why Dr. Lester and other professionals have to write these guides because untrained people in photography are taking these important photographs.

What is the main takeaway you hope readers get from your story?

My message is to always keep health disparities in mind. There’s a tendency for people to think that technology is this objective arbiter of truth like it’s a photograph, it’s a representation, or it’s the AI [artificial intelligence] machine that is more perfect than us. But the fact that we built it and we’re imperfect beings means that there will be bias in it. Understand that bias permeates almost every aspect of modern technology. It’s really important to recognize this because then we can start to fix it. It’s not a lost cause.

What lessons learned do you have for our members writing about health technology or medical photography?

The topic was just so large. You think that medical photography is a small thing, but the more you dig, especially with anything tech-related, I feel like you have to give yourself time to fully understand the process and wrap your head around OK, how does this work? My mentor Alexandra said that instead of trying to shove everything in one story, decide what is interesting or a side thing related to the main story that you can put in a box for another day. Finding the beginning, middle, and end and what you can branch out of this is helpful to consider. That way, you’re not overwhelmed [During research] I was like, ‘Oh my God, this part is interesting. This thing is interesting.’ It was hard to keep focused.

I thought it was a cool kind of niche intersection, which is way more important than you think. Only big health systems have actual medical photographers. Everywhere else, you have to use your clinicians.