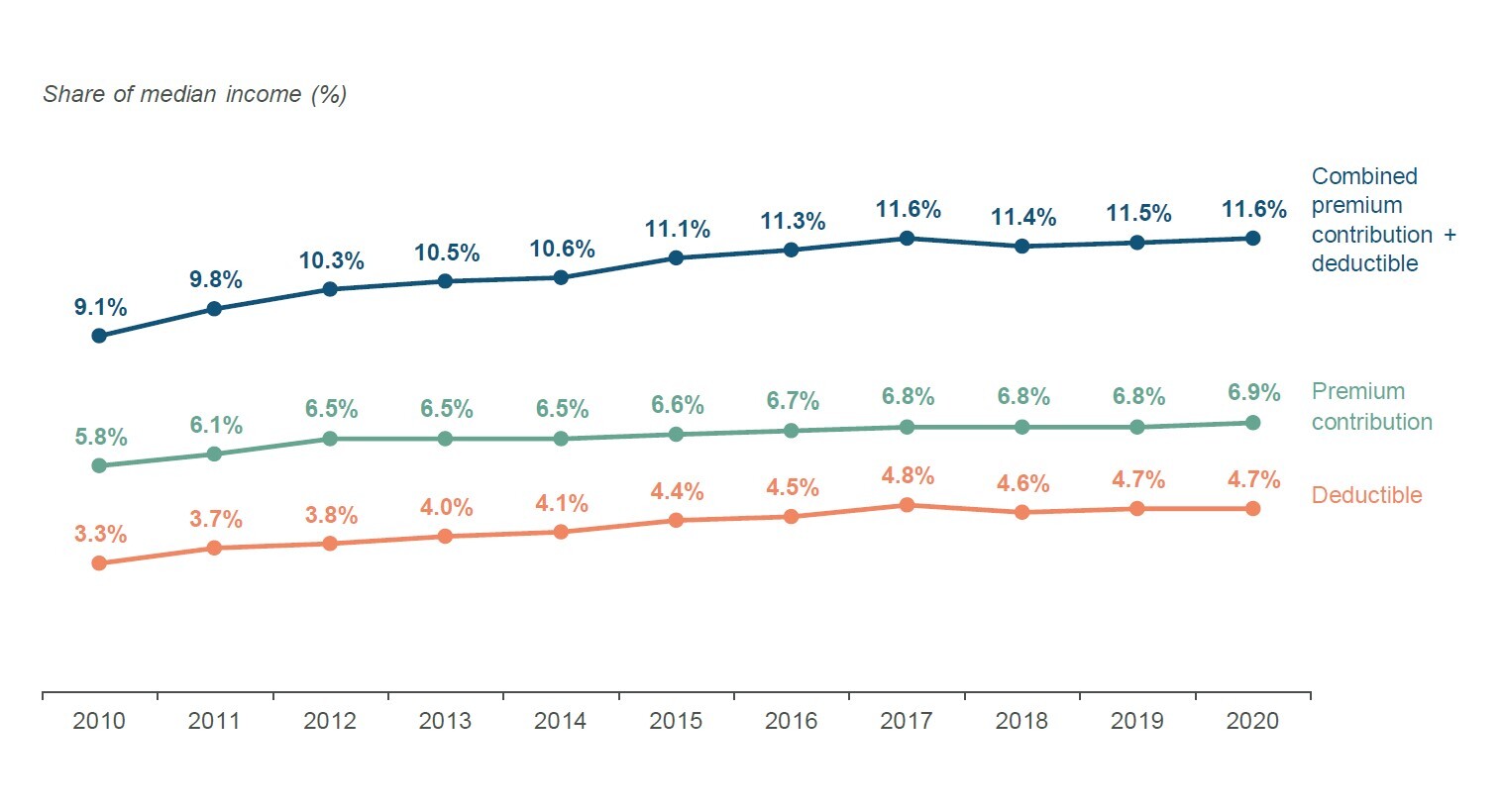 For employer-sponsored health insurance in 2020, premiums and deductibles accounted for 11.6% of the U.S. median household income, an increase from 9.1% in 2010, according to a report published Jan. 12. Source: State Trends in Employer Premiums and Deductibles, 2010–2020, The Commonwealth Fund, New York, January 2022.

In every state, what families pay for employer-sponsored health insurance is consuming a greater share of household income than it did 10 years ago, according to a new report from the Commonwealth Fund. And rising health care costs and drug prices have caused employers to raise monthly insurance premium payments and deductibles to the point where those increases have outpaced median family incomes.

In the report, researchers from the Commonwealth Fund noted that in 37 states, premium contributions and deductibles amounted to 10% or more of median income in 2020, an increase from 32 states in 2015 and from 10 states in 2010. For employers’ plans, health insurance premiums and deductibles accounted for 11.6% of the U.S. median household income in 2020, up from 9.1% in 2010, according to the report, State Trends in Employer Premiums and Deductibles, 2010–2020, published Jan. 12.

Health care journalists could write this story in every state because the report includes extensive data on premiums and deductibles in each state for employer-sponsored health insurance. The report also shows that family income often fails to keep pace with rising health care costs, leading many to be underinsured so that they skip needed care and go into debt to pay for care.

For an excellent example of how to cover this story, see this report from Tom Miller, the morning news anchor at KXAN in Austin, Texas, on Monday (Jan. 17): “Health insurance costs keep rising in Texas—here’s why.” Miller’s report could be a model for journalists in all 50 states, in part because he explained that many employed Texans pay more for health insurance than residents in other states.

The report’s extensive state-level data showed that employees in Texas pay so much for premiums and deductibles for family coverage ($6,950 in 2020) that the Lone Star State ranks 43rd among the 50 states and the District of Columbia.

Families in Florida with employer-sponsored coverage paid the most for health insurance premiums and deductibles in 2020, $7,674, while families in Washington State paid the least at $4,610, the report explained.

Another story to cover from this report is that middle-income workers in most states spend 10% or more of their family budgets on health insurance premiums and deductibles. “That’s a burden that many families are finding increasingly difficult to shoulder, as their incomes fail to keep pace with rising health care prices,” the researchers noted.

The report also defined being underinsured as having a deductible equal to 5% or more of income. People who are underinsured are likely to skip care and struggle to pay medical bills, the report noted. New Mexico had the highest average deductible of 7.4% of median income in 2020, the researchers said.

Another angle to cover is medical debt, which is endemic in the United States, the researchers explained, citing an earlier Commonwealth Fund report. In the 2020 report, researchers showed that more than one-third of adults who had commercial insurance plans requiring a deductible of $1,000 or more in 2020 did not get the health care they needed because of the cost. And more than 40% of adults with a deductible of $1,000 or more that year reported problems paying medical bills or that they went into medical debt. That report was “U.S. Health Insurance Coverage in 2020: A Looming Crisis in Affordability.”

In July, researchers from the Harvard Business School, Stanford University and the University of California, Los Angeles, analyzed consumer credit reports from January 2009 through June 2020. The credit reports were from a representative sample of 10% of people in the United States. The researchers’ goal was to estimate the total amount and distribution of medical debt in collections.

In June 2020, an estimated 17.8% of U.S. residents had medical debt in collections, the researchers said. Also, medical debt was highest among people who lived in southern states and in ZIP codes where income was low, they added. In particular, medical debt was concentrated in lower-income communities in states that did not expand Medicaid, they wrote. The research was published in JAMA, “Medical Debt in the US, 2009-2020,” on July 20, 2021.