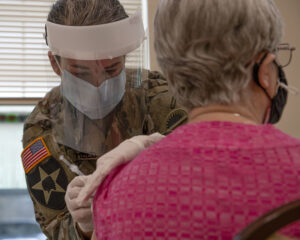 New research published in the CDC Morbidity and Mortality Weekly Report (MMWR) revealed how much more effective COVID-19 vaccines are compared with natural immunity at preventing hospitalizations in people over 65. Data analysis from nine states show that the odds of COVID infection in hospitalized people were nearly 20 times greater among unvaccinated seniors than  fully vaccinated recipients with no previous documented infection. Additionally, the study found hospitalized people under 65 who were unvaccinated were at 5 times greater risk of COVID infection compared with those who received both doses of an mRNA shot.

The study further confirms that vaccine-induced immunity was more protective than infection-induced immunity against laboratory-confirmed COVID-19. Study researchers issued several strong calls for everyone eligible to get vaccinated against COVID-19 as soon as possible, even if they have previously been infected with SARS-CoV-2.  It’s especially important for the older population who are not yet fully vaccinated to do so, said the experts. Although those 65 and older make up about 16% of the total U.S. population, they account for some 75% of COVID deaths.

Benefits of vaccination in older populations

Vaccines protect against getting infected, going to the emergency room, and being hospitalized and dying, said study co-author Shaun Grannis, M.D., professor of family medicine, at the Indiana University School of Medicine, and vice president for data and analytics at the Regenstrief Institute.

As we age, our immune response naturally declines, making older people more vulnerable to the effects of the virus, and more likely to be hospitalized. Seniors tend to have more comorbid conditions, which also increases risk of severity. “Essentially, the more vulnerable you are to the virus, the more effective the vaccine is going to be,” Grannis said.

Most older people are taking these messages to heart. Approximately 90% of those over 65 have received at least one dose of the vaccine, according to CDC data. However, only about 82% were fully vaccinated (with either a second mRNA dose or a single-shot Johnson & Johnson shot), as of Nov. 5. Reaching the remaining population with the message to get vaccinated, even if they have had the virus, is a challenge.

These are not necessarily people who will be swayed by evidence and data, although study after study has shown high efficacy of COVID vaccines in preventing cases, visits to the ER, hospitalization and death among older people, according to Grannis. “However, for many, it’s also about trusting the source.” That’s where local health providers — doctors, nurses, pharmacists — can play a key role in swaying more reluctant populations.

A closer look at study methodology and key findings

The CDC’s study compared the early protection against COVID-19 from SARS-CoV-2 infection and by receipt of mRNA COVID-19 vaccines 90 to 179 days after infection or vaccination. Researchers collected data from 187 hospitals across nine states from January–September 2021. Eligible hospitalizations were included adults 18 and older who had received SARS-CoV-2 molecular testing from 14 days before to 72 hours after admission and had a COVID-19–like illness discharge diagnosis.

Laboratory confirmed illness was comprised of a positive SARS-CoV2 result from molecular testing and a COVID-like illness. Both community-dwelling older adults, as well as any long-term care facility patients who were transported to an emergency department and hospitalized, were included in the analysis.

Researchers identified 201,269 hospitalizations for COVID-19–like illness; 139,655 (69.4%) patients were hospitalized after COVID-19 vaccines were generally available to persons in their age group within their geographic region. The analysis found that among those 65 and older with COVID-19–like illness hospitalizations. the adjusted odds ratio of laboratory-confirmed COVID-19 were higher among previously infected, unvaccinated patients than among fully vaccinated patients (19.57).

Researchers caution there are several limitations to this study: only nine states were involved, although Grannis pointed out that there was good geographic representation; vaccinated patients may be less likely to seek testing prior to hospitalization; results might not be generalizable to non-hospitalized patients who have different access to medical care or different health care–seeking behaviors, particularly outside of the nine states covered; and the Johnson & Johnson vaccine was not included in this analysis. The study was completed before booster shots became widely available and this data was not included.

However, one thing is abundantly clear, according to Grannis: anyone who has been previously infected with COVID will be better protected against future risk if they are fully vaccinated. And for older adults, who are at such a high risk of serious illness, hospitalization and mortality, vaccination may literally make the difference between living and dying.