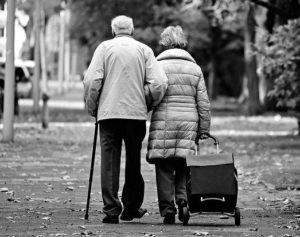 Photo by MabelAmber via Pixabay

When it comes to health care, neighborhood location matters — not only now, but also as we age, according to a recent study published in JAMA. While it’s not surprising that living in various neighborhoods is linked to how well older adults function during their lifespan, more accurate estimates of these disparities may help change the outcomes.

Researchers at the Yale School of Medicine and University of Maryland used a new social determinant of health, neighborhood disadvantage, to assess the ability of participants to perform essential activities of daily living required to maintain independence. This study focused on four key activities — bathing, dressing, walking and transferring. Life expectancy with and without disability are often used by policymakers to forecast the well-being of older people.

The prospective longitudinal study included 754 non-disabled community-dwelling older adults age 70 or older (mean age 78.4) living in south-central Connecticut; researchers followed up with them each month by telephone for up to 22 years (from March 1998 to June 2020). Participants who needed help with any of the essential activities were considered disabled.

Neighborhood disadvantage was determined based on the Area Deprivation Index, a census-based socioeconomic measure with 17 education, employment, housing quality, and poverty indicators. Compared with participants living in non-disadvantaged neighborhoods, people in the disadvantaged group were more likely to be female, Medicaid eligible, and cognitively impaired but were less likely to be white and live alone. They also had fewer years of education and lower income.

The authors point out that a long history of racial and socioeconomic segregation throughout the U.S., including Connecticut, likely contributed to deficiencies in resource-poor environments. These deficiencies include increased exposure to physical and chemical hazards, limited ability to practice healthy behaviors and access high-quality and affordable medical care.

These study results may help inform social and public health interventions to enhance the well-being of older adults in resource-poor neighborhoods, according to the National Institute on Aging.

Some highlighted solutions in the study include broader support for evidence-based interventions such as Community Aging in Place—Advancing Better Living for Elders. The program addresses personal and environmental factors that contribute to disability, as well as additional investments in public transportation in disadvantaged neighborhoods. These include expanding door-to-door services for older people with mobility limitations, which would provide greater access to medical care and grocery stores.

Journalists interested in pursuing this story further can look at their neighborhood atlas characteristics and compare them with local social service, health, and transportation availability in disadvantaged vs. non-disadvantaged communities. What is your city/state doing to address the gaps? What cost-effective programs are in place or need to be?