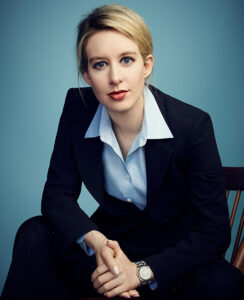 Elizabeth Holmes once claimed she would revolutionize health care with a testing device that could check for multiple conditions using just a few drops of blood from a finger prick. Now she’s on trial in federal court for 10 counts of wire fraud and two counts of conspiracy to commit wire fraud — charges that carry prison terms of up to 20 years.

The case offers a good reminder for journalists to do their due diligence when reporting on new medical tests and technologies and not to be swayed by celebrity status, even when others jump on the bandwagon. (For those unfamiliar with Holmes’ story, The Washington Post published a good primer, and The Wall Street Journal posted a video recap on its website.)

When she was 19 and still a student at Stanford in 2003, Holmes founded the laboratory technology company Theranos. Shortly after, she dropped out of school to run the venture full time. Before long, she’d adopted mannerisms of her idol, Apple co-founder Steve Jobs, even wearing black turtlenecks as he had done.

Her networking and persuasive speaking skills attracted high-profile board members and hundreds of millions from investors, including media mogul Rupert Murdoch, the Walton family (founders of Walmart), former Secretary of State George Shultz and former Secretary of Education Betsy DeVos. The company made deals with Safeway and Walgreens to offer its blood testing in their stores.

Journalists were also wowed by Holmes and her claims. Fortune featured her on its cover in 2014, as did Forbes. She was listed as one of Glamour’s women of the year in 2015 and one of Time’s “100 Most Influential People” of 2015. The Time article was written by former U.S. Secretary of State Henry Kissinger, one of her board members.

Theranos’ image began to crumble in 2015 after journalist John Carreyrou at The Wall Street Journal acted on a tip he received from a pathologist blogging about the lab testing industry who had a hunch that Theranos’ technology might be a sham. In two articles that October, Carreyrou wrote about how the technology wasn’t working consistently, how the company was performing some tests on other commercially available machines, and how employees were afraid to voice concerns.

The company was subsequently scrutinized by the Food and Drug Administration, the Centers for Medicare and Medicaid Services, and the Securities and Exchange Commission. Then, it was sued by Walgreens and others.

The SEC in March 2018 charged Holmes and company president Ramesh “Sunny” Balwani (who at one point was her boyfriend) with raising more than $700 million from investors “through an elaborate, years-long fraud in which they exaggerated or made false statements about the company’s technology, business and financial performance.” The company closed in September 2018, and three years later, Holmes’ trial began in San Jose, Calif.

Carreyrou, a keynote speaker at Health Journalism 2018, wrote about Theranos in his book “Bad Blood: Secrets and Lies in a Silicon Valley Startup.” Since the book was published, Carreyrou obtained “heaps of new documents, emails and texts,” he says in the first episode of his new podcast, “Bad Blood: The Final Chapter,” in which he dives more into the story and covers the federal trial.

During the government’s opening statements, the lead prosecutor “called attention to Holmes’ role in using the media and positive press coverage to propel her company and attract investors,” according to an article in CNN Business. The trial offers plenty of lessons for journalists.

“Don’t fall for celebrities in science and health care — it’s usually not a formula for good science,” Gary Schwitzer, publisher of HealthNewsReview.org and a two-term former board member for AHCJ, said via email. Over a 13-year period, Schwitzer and his crack team of reviewers analyzed reporting in some 2,600 news stories, including several covering Theranos and its technology. Many fell into common themes: data taking a back seat to celebrity, a rah-rah attitude toward a new screening tool, and a lack of outsider perspectives, he said.

A November 2015 post by former AHCJ president Trudy Lieberman, for example, pointed out how many journalists fell victim to “a good story” featuring a college dropout rising star and her purportedly humanitarian mission — not subjecting patients to multiple draws of blood. Even after the Wall Street Journal brought to light many problems with the company and its testing methods, Lieberman noted, the press seemed reluctant to let go.

“What’s wrong with framing…stories about life and death devices and drugs around the glamour of celebrity?” Lieberman wrote. “It leaves out too much crucial information,” such as how devices get approved or are regulated, if they are appropriate, or if they encourage overuse of medical resources.

A June 2018 guest post on the site by pathologist Benjamin Mazer noted that his professional community was skeptical of the technology. Had journalists consulted pathologists as expert sources, he suggested, the news coverage might have been equally skeptical, and patients might have been spared erroneous tests.

Schwitzer agreed that a common flaw in many Theranos stories was not turning to perspectives from independent experts.

There was “lots of fawning over claims made in the data-free zone,” he said. “This is basic stuff: Where’s the evidence? How good is the evidence?”

Schwitzer’s team did identify some better reporting. In May 2016, they praised Katherine Hobson for her FiveThirtyEight story “Theranos is Wrong: We Don’t Need More Blood Tests.” “Theranos wants us to believe that ostensibly healthy people can get healthier by having more tests, but the science suggests that is far from true,” Hobson wrote. “The vision of giving everyone widespread access to more blood tests in the belief that more information is always better is naïve at best, and harmful at worst.”

This is “arguably the most important overlooked element of the Theranos story,” Schwitzer said. In many stories about the pitfalls of screening tests and overdiagnosis, HealthNewsReview.org reviewers “demonstrated how a pro-screening bias exists with many journalists and many news organizations, outside the boundaries of evidence,” he said.

Schwitzer’s group also lauded Jenny Gold of Kaiser Health News for her story, “Reporter’s Notebook: The Tale of Theranos and the Mysterious Fire Alarm,” in which Gold detailed how Theranos’ press team pulled tricks including allegedly pulling a fire alarm at a Walgreens to discourage her from reporting her story. Gold pursued “sound journalistic fundamentals that many others abandoned as they became Theranos cheerleaders and stenographers,” Schwitzer said.

Even after Theranos’ downfall, Schwitzer’s team found similar reporting flaws in other news coverage, including from a 2019 press release about a “simple” blood test for early detection of breast cancer. “When will journalists ever get the message?” he asked.

“We have warned journalists and the general public for years – whenever you hear about a ‘simple test,’ run for the hills because there’s no such thing,” Schwitzer said. “There was nothing simple about the Theranos claims, but a simple-minded acceptance of what the company claimed, without a demand for data, was common.”

Resources journalists can use for covering new tests and technologies:

HealthNewsReview.org compiled a list of 10 criteria to use when reviewing health news articles and press releases: