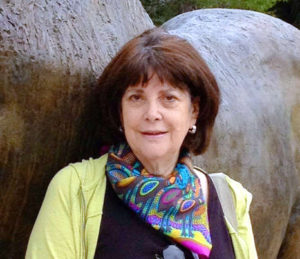 Judi Kanne regularly gathered compelling story ideas from her many conversations, travels and meetings, then dug into subjects with the knowledge of a nurse and the passion of a journalist.

Combining both careers, her articles covered a fascinating range of topics: health literacy, essential oils, hospital laundry, paramedics and eating disorders. Some of her stories covered surprising medical breakthroughs, while others revealed the human side of healing.

Always, Judi dealt with editors and interviewees with a cheerfulness and warmth that came naturally to her. She made instant friends of the people she met.

After a series of puzzling and painful symptoms, Judi spent more than two months in two hospitals and a rehab facility earlier this year. Her husband, Barry, said it took some time for doctors to figure out her diagnosis because so many body functions were affected. Many people with Lewy body dementia develop movement symptoms as Judi did.

It’s a testament to her devotion to her dual nursing and journalism careers that while experiencing symptoms, she wanted her final story for Georgia Health News to be completed and published. Based on her reporting notes, the story was posted in May, about the upcoming launch of the Georgia Nurses Hall of Fame.

A life of learning and working

A daughter of Polish immigrants, Judi was born and raised in San Diego. She married her sweetheart, Barrett Michael “Barry” Kanne, in 1962, and they celebrated 59 years together this past St. Patrick’s Day.

Barry’s career at Motorola took them around the country. In 1970, they moved to the Chicago area, where they raised their two daughters. There, Judi enrolled at a community college, where she received an associate degree in nursing, and then worked at hospitals around suburban Chicago.

In 1981, Judi and family moved to Dunwoody, outside Atlanta.

Still interested in furthering her education, Judi enrolled at Georgia State University and earned a bachelor’s degree in journalism in 1992. She then focused on medical writing, working primarily for the CDC as a contracted communications specialist.

A lifelong learner, Judi returned to school years later, after reaching “retirement” age. In 2012, she earned her second bachelor’s degree, this time from Clayton State in 2012. It was a degree in nursing. Her goal was to update her medical credentials and learn the latest clinical trends.

At age 69, she was the oldest graduate in the history of the Clayton State University College of Nursing.

As a freelance health care journalist, Judi began writing articles for Georgia Health News in 2013. She also wrote for Atlanta Senior Life and other publications.

A zest for the truth … and fun

Over the past decade, Judi was a fixture at AHCJ’s Health Journalism conferences and at local Atlanta chapter meetings, often accompanied by Barry, who was her proofreader and occasional personal photographer.

Jeanne Erdmann, an AHCJ board member and head of its Freelance Committee, said that during Judi’s work on the committee, “her gentle demeanor and her enthusiasm kept many of our projects moving forward.’’

“I can speak for all of our committee members when I say that we valued her kindness and the smile that always seemed to be there,” Erdmann said. “We’ll miss her greatly. I do hope that she knew her worth. Judi certainly meant a lot to us.”

Former AHCJ Executive Director Len Bruzzese remembered Judi’s dedication. “Judi was such a devoted AHCJ member,” he said. “She was on our local planning committee for our terrific 2012 Atlanta conference, took part in local chapter meetings, helped out younger members and served on the nationwide Freelance Committee — always with a smile and friendly word.”

In 2019 Judi earned a fellowship in geriatric medical writing from the Gerontological Society of America. She proved her mettle in this area, writing stories about mobility devices, mental health challenges, and seniors’ risks of falling.

“I remember us slithering across the icy roads of Cleveland in April of 2016, and a year later, running for shade in the garden of our Orlando conference hotel. I remember us sitting on the floor in a Phoenix conference hall waiting for our slots at the freelance pitch fest, laptops on our laps, frantically making last-minute changes and laughing in despair because we were always late, and we were always nervous, and in the end, it would always work out.’’

“Judi was serious about her reporting – and probably one of the most ethical journalists I’ve ever met. She was competitive only with herself and the most generous to share – from story ideas and sources to contact info for editors.’’

Ridderbusch remembers Judi as an adventurer who was always curious about people, places and “back stories.’’

“She was the happiest when she and Barry embarked on cross-country trips in their RV. From the road, she often sent selfies of them at quirky locales, with hearty food and funky drinks. She sometimes even traveled in the RV to an AHCJ conference – making an expedition out of a business trip.’’

In lieu of flowers, please consider contributions to the Lewy Body Dementia Association or the Georgia Nurses Association.

Some of Judi Kanne’s work for Georgia Health News: