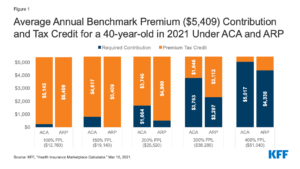 From February 15 through June 30, 1.5 million Americans signed up on HealthCare.gov, and 600,000 enrolled in the 14 states and the District of Columbia that run their own state-based marketplaces. Since April 1, the administration noted that among those new and returning consumers, 1.2 million (34%) selected plans that require premium payments of $10 or less per month. Those lower rates are the result of increased premium subsidies under the American Rescue Plan Act (ARP) that Congress passed in March.

While these announcements were good news for those who are already enrolled, important angles remain for journalists to explain the program to those who remain uninsured or who could get better coverage for less money.

One angle to explore is the number of Americans in each state who are uninsured despite qualifying for increased premium subsidies under the ARP. It’s likely that many Americans do not know that the ARP has helped to lower health insurance costs under the ACA, also called Obamacare. Data on the number of uninsured in each state and in the United States are available from KFF, although those numbers are from 2019. The data show that about 29.3 million Americans (or 9.2% of the population) were uninsured nationwide in that year.

Keep in mind that since the ACA was passed in 2010, not all Americans have viewed the law favorably. In May, for example, the KFF tracking poll on the public’s views of Obamacare showed that 35% of all adults had an unfavorable opinion of the law. Those unfavorable views likely stemmed from the high cost of health insurance premiums.

Also, it may be that few individuals and families with income above 400% of the FPL know that, under the ARP, they are eligible for premium subsidies on the marketplace that limit what they would pay for the benchmark plan to no more than 8.5% of household income. Previously, there was no limit for those with income above 400% of FPL. The ACA defines the benchmark plan as the second-lowest-cost silver plan available on the exchange in a given area

It’s also likely that many Americans are unaware that among those who signed up since February 15, many are paying no monthly premiums for their health insurance, as NPR health policy reporter Selena Simmons-Duffin explained.

Zero-dollar premium insurance under the ACA is not new for those who choose the lowest-level ACA bronze plans. But many of these plans require consumers to pay high out-of-pocket costs (copayments, coinsurance and deductibles) at the point of care.

“What’s different now is that people also can get better, more comprehensive silver plans with no monthly premiums,” Simmons-Duffin added. She quoted Charles Gaba, a health policy expert who runs www.ACASignups.net. Individuals earning less than 150% of the federal poverty limit (about $19,000 annually or $39,000 annually for a family of four) would pay nothing for the benchmark silver plan, which the ACA defines as the second-lowest-cost silver plan available on the exchange in a given area, Gaba noted. Bronze plans cover about 60% of consumers’ health care costs, and silver plans cover about 70% of such costs.

In the other category are those who lost a job in the last year and couldn’t afford to pay their premiums under COBRA. COBRA is an acronym for the federal Consolidated Omnibus Budget Reconciliation Act, enable the newly unemployed to pay their own premiums if they want to continue getting employer-based coverage.

The problem with COBRA is that these payments can be expensive, according to Investopedia. The ARP provides 100% COBRA premium coverage for qualified individuals through September 30, Investopedia noted. The federal Department of Labor also has explained how COBRA coverage works under the ARP.