View all posts by Kerry Dooley Young and Karen Blum → 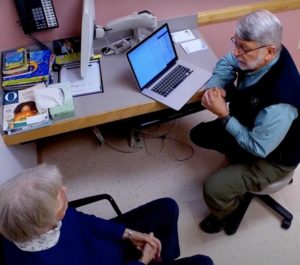 OpenNotesPeter Elias, M.D., talking with a patient in a clinical visit. He shares his progress notes.

April 5 marked the official start of a federal mandate meant to allow consumers easier access to their medical records while also barring organizations from profiting by restricting access to this information.

The mandate states the eight types of clinical notes that must be shared, including:

A major part of this effort is intended to tackle a longstanding industry practice known as “information blocking,” which is somewhat akin to holding hostage information in electronic health records (EHRs). Since the April 5 deadline kicked in, medical organizations and health information technology (IT) firms have been under an order to stop practices that can keep people’s medical records being siloed in competing EHRs.

Federal officials have concerns about how well health IT firms and medical organizations will comply with this mandate. The Biden administration has asked Congress to provide $5 million to investigate cases of noncompliance in fiscal 2022, which begins in October. These funds would be provided to the Office of the Inspector General at the Department of Health and Human Services (HHS) for extra staff that can enforce the rules on information blocking, HHS said in its fiscal 2022 budget briefing document.

The HHS’ Office of the National Coordinator for Health Information Technology (ONC) has posted a flyer online to increase awareness of the new rule.

“Information blocking is a serious problem because it can prevent timely access to information needed to manage patients’ health conditions and coordinate their care,” ONC said. “Further, it can prevent information from being used to improve health, make care more affordable, and research new treatments and cures.”

Health IT firms appear to have sought to “lock in” customers to their systems, making it prohibitively expensive to switch to rival products that may offer better service, the ONC staff said in the report. Organizations also sometimes charged additional fees to allow clinicians to extract patient data from their systems, even though the cost of providing that data is small, ONC staff found.
“These business practices, combined with the expense of implementing and training staff on new systems, make it very costly and difficult for providers to switch to other technologies, even when they are unsatisfied with the performance of their existing technology,” the report said. ONC also found patterns that suggested hospitals would limit the flow of data to clinicians outside of their network for competitive reasons. “Evidence shows that larger hospital systems are more likely to exchange electronic health information internally but are less likely to exchange electronic health information externally with competing hospitals and unaffiliated providers,” the ONC staff wrote in the report.

There are eight allowable exceptions, including cases where health information can be temporarily taken offline while computer systems are updated. Clinicians also can safeguard health information related to specific security risks. The group OpenNotes has posted a primer on the April 5 changes, which is free for use under the terms of a Creative Commons Attribution 4.0 International License.

The other major deadline looming for health IT is slated to kick in on Dec. 31, 2021. That’s when consumers will have access to their medical records via whatever third-party application (“app”) they chose to download to a smart phone or another device.

Journalists might want to check in with hospitals and medical practices in their regions to see how they are managing the first deadline, suggests Catherine DesRoches, DrPH, executive director of OpenNotes. Based at Harvard’s Beth Israel Deaconess Medical Center, OpenNotes has been working for more than a decade to expand patients’ access to their medical records.

“They can take the temperature of how their local organizations are doing,” DesRoches said in an interview with AHCJ. “Are they doing anything to tell patients about this change? Are they providing any education to their patients and their clinicians about what kinds of information are now available to them?”

In some cases, hospitals and medical groups already have made it easy for patients to access their records, DesRoches said. There’s been a drive in recent years for easier patient access to their medical records, which theoretically was guaranteed by the Health Insurance Portability and Accountability Act (HIPAA) of 1996. In a webinar posted by the American Medical Association, DesRoches said an estimated 260 medical organizations were already were sharing notes with more than 54 million people.

The new EHR mandates stem from long-standing complaints about information blocking, such as charging prohibitive prices for access to data and developing systems that increase the cost of sharing data. To address this, Congress added provisions addressing EHR access to the sweeping 21st Century Cures Act of 2016, which focused primarily on changing drug regulation and research. A 2015 ONC report found “substantial evidence” of organizations charging exorbitant fees and designing contracts that restricted people’s ability to access their own health information, said Sen. Patty Murray (D-WA) at a 2017 hearing.

“When systems cannot speak with each other and people cannot speak up about the problems they see, it is patients who do get hurt,” she said.

Additional points for journalists to be aware of: