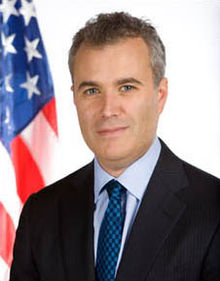 As President-elect Joe Biden develops a strategy for ending the pandemic, the person who will be in charge of executing the plan will be Jeffrey Zients.

Zients, who Biden named the White House coronavirus czar, is a businessman and former top economic adviser to President Barack Obama. In the new role, he’ll be corralling federal, state and local resources to create a national testing program, to fix gaps in the medical supply chain and to expand the roll out of coronavirus vaccines.

“This will be one of the hardest and most costly challenges in our nation’s history,” Biden said on Dec. 8, when he announced his health care leadership team.

Zients will face multiple challenges from developing a data infrastructure to track vaccinations to getting the vaccine to underserved communities. He will also have to navigate politics, including getting Republican governors to cooperate with the new administration’s plans.

At the beginning of the pandemic, the Trump administration created a White House Coronavirus Task Force, led by Vice President Mike Pence, but the group has largely played an advisory role, as the administration decided state governors and local leaders should set pandemic policy, rather than exerting a strong federal role. A change in that approach could meet strong resistance.

Republicans “are going to fight [the government deciding] who gets the vaccine, who distributes it and if there’s any need for [vaccination] requirements before you can go to work, school, get on a plane,” Robert J. Blendon a professor of health policy and political analysis at Harvard University told The Washington Post.

Zients has already begun the work of trying to bring governors onboard. As co-chair of Biden’s transition team, Zients has been examining policies and pandemic efforts underway by the Defense, Health and Human Services, and Homeland Security departments. He has also been participating on calls with governors and state officials to share data and discuss concerns about the pandemic response.

“Zients has been impressive,” one state Democratic official who has participated in the calls told the National Post. “If the people currently involved in the transition are involved come January, I think we are in good hands.”

Zients is known for his ability to fix complex organizational challenges. He took on numerous roles in the Obama White House – from chief performance officer, to deputy director of the Office and Management and Budget, to director of the National Economic Council. For a time, he was tasked by Obama with fixing the botched 2013 roll out of HealthCare.gov, the online website for purchasing health insurance under the Affordable Care Act.

Obama called Zients “wicked smart,” in a May 2018 interview with the Washington Post. “He always projects a sense of being much more concerned about getting the job done than who’s getting the credit,” he said of Zients.

Prior to joining the Obama administration, he was CEO of the Advisory Board, a health care consulting company. He was also on the board of Sirius XM/Satellite Radio and Revolution Health Partners and played a key role in bringing baseball back to Washington, D.C. After the Obama administration, Zients co-founded an investment firm called Cranemere Group, and served on the board of Facebook. He resigned from Cranemere and left Facebook’s board earlier this year.

Zients corporate ties raise concerns among members of the Democratic party’s left wing, especially his association with Facebook. The social media platform has been a source of misinformation about COVID-19 and vaccines.

“Biden needs to hear from fewer wannabe Warren Buffetts, and more people with their finger on the pulse of middle America,” Jeff Hauser, who runs the Revolving Door Project at the Center for Economic and Policy Research told Bloomberg. “We’re going to make an argument that his mindset is at odds with Biden’s stated goal of an FDR-style administration.”

Biden will arrive in office amid a pandemic. It will be his biggest challenge – but also an opportunity. (Washington Post, Dec. 15)

Jeff Zients was with Obama for the long haul – and now he is going long in investing (Washington Post, May 2018)

Who is Jeffrey Zients and how is he qualified to fix HealthCare.gov, (Washington Post, October 2013)