Leaders of both political parties in the U.S. House and Senate reached agreement Sunday to pass a $900 billion bill to stimulate the economy. That bill also included language supporting a long-sought plan to end surprise medical bills for some patients.

In addition, the bill will fund distribution of vaccines for the coronavirus and aid individuals and businesses struggling to pay their bills during the pandemic.

Members of the House and Senate passed the measure on Monday night as a deadline loomed to fund federal government operations through September.

The House version of the bill is online here and Larry Levitt of KFF tweeted that the provisions protecting patients from surprise medical bills starts on page 4,095. Search for the words “No Surprises Act.”

Writing about the portion of the legislation that will affect surprise medical bills, Sarah Kliff and Margot Sanger-Katz got the lede on their story for The New York Times exactly right: “After years of being stymied by well-funded interests, Congress has agreed to ban one of the most costly and exasperating practices in medicine: surprise medical bills.” 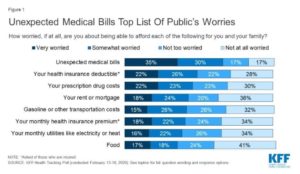 Image: KFFAbout two-thirds of Americans say they are either “very worried” (35%) or “somewhat worried” (30%) about being able to afford unexpected medical bills, according to a survey that KFF published in February.

The first five paragraphs of their article outline the most important points that journalists covering this story need to know about surprise medical bills.

First, well-funded medical provider groups have opposed similar legislation in the past because hospitals and doctors tend to benefit from the system that allows them to send out surprise medical bills. Therefore, they fought to defeat previous legislation that would lower their pay, Kliff and Sanger-Katz wrote.

Late last year, Congress was prepared to pass legislation to ban surprise bills. But that bill failed after provider groups lobbied against the bill aggressively. “Private-equity firms, which own many of the medical providers that deliver surprise bills, poured tens of millions into advertisements opposing the plan,” they added.

Many doctors won’t even know the answer when they’re treating patients. That information is handled in the billing office. Kliff and Sanger-Katz explained, “Such doctors often bill those patients for large fees, far higher than what health plans typically pay.”

Fourth, starting on Jan. 1, 2022, doctors, hospitals and air ambulance companies will be banned from surprise bills. Instead, they will need to negotiate a fair price with patients’ health insurers.

Fifth, Kliff and Sanger-Katz explained that some private-equity companies have acquired groups of ER physicians and other doctors. Once they buy these groups, the physicians leave the insurance networks they were in so that they can charge out-of-network rates. Rates for out-of-network care are often higher than in-network rates. In this way, “Some private-equity firms have turned this kind of billing into a robust business model…” they wrote.

With any legislation, the details will be important, and this bill is no exception. Starting in 2022, when insurers and medical providers cannot agree on a payment rate, the legislation requires both parties to use an outside arbiter to set a fair amount, they explained. That amount would be based on what other doctors and hospitals typically get paid for similar services. Patients could be charged what they might normally pay for in-network care, but not more, they added.