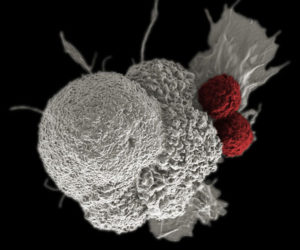 If you write anything about cancer treatment, it’s nearly impossible to avoid writing about immunotherapy. But reporting on immunotherapy can quickly become complex, confusing and overwhelming. A new AHCJ tip sheet on cancer immunotherapy can help you to report effectively and appropriately on the topic.

The therapy is exactly what it sounds like. Cancer immunotherapy works to recruit the patient’s immune system to fight the cancer instead of using chemotherapy to kill cancer cells directly. While the FDA did not approve the first immunotherapy drug for cancer — interferon-alpha 2 — until 1986, the groundwork for the therapy and its first use dates back nearly a century. For details, check out Sciline’s fantastic primer on cancer immunotherapy.

Not until the 21st century did immunotherapy begin to be more adopted as a therapy, helping to revolutionize cancer treatment. That’s when researchers began developing checkpoint inhibitors, which are drugs that can release cancer’s chokehold on the immune system’s defenses so the immune system can attack cancer. The FDA in 2011 approved the first checkpoint inhibitor — ipilimumab — for treating melanoma.

Other forms of immunotherapy besides checkpoint inhibitors exist as well, such as CAR T-cell therapy. This therapy involves extracting T-cells from the patient, modifying them in the lab to make them capable of finding and killing cancer and then re-injecting them into the patient.

Advances in immunotherapy are exciting and rapidly occurring, but these treatments involve plenty of hype and pitfalls as well — and they certainly aren’t cheap. Journalists should know what questions to ask of researchers, what to look for in studies, and investigate more broadly about these treatments to ensure their coverage is accurate, thorough and responsible.

One place to start is “Six tips for writing accurately about cancer immunotherapy drugs,” from Joy Victory, former deputy managing editor of HealthNewsReview.org. See our new tip sheet for her checklist.