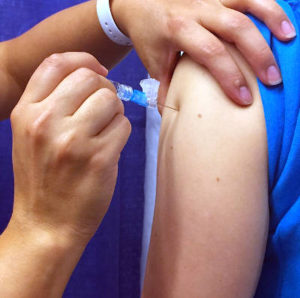 Get your flu shot. Never, perhaps, has that advice been as important for older adults to act on as this year. As winter approaches, geriatricians and infectious disease experts are increasingly concerned about the effects of even a mild flu season on an already-vulnerable older adult population, especially those in long-term care facilities.

It’s been likened to “a perfect storm,” and sailing in “uncharted waters,” according to a recent editorial in Science magazine by Edward Bologna, director of the Center for Clinical Epidemiology and Population Health at the Marshfield Clinic Research Institute in Marshfield, Wisc., and Michael T. Osterholm, director of the Center for Infectious Disease Research and Policy at the University of Minnesota in Minneapolis. Cliches aside, the reality is we have no idea what to expect when the pandemic and flu season converge, especially without a proven COVID-19 vaccine that is safe and effective in the older population.

Even scarier is the prospect of a second wave of COVID running rampant throughout the U.S. — now at 200,000-plus deaths and rising. We already know the disease disproportionately affects older, sicker, and minority populations.

As we see COVID-19 resurging throughout the country this fall, we will face what L.J. Tan, Ph.D., chief safety officer of the Immunization Action Coalition, calls a “twindemic” of flu and COVID-19, coupled with overlapping high-risk conditions like cardiovascular disease or chronic respiratory illness. It will almost certainly result in much worse outcomes.

“It’s a double whammy,” Tan said in a phone interview. Even relatively healthy people with co-infections of flu and COVID-19 may lead to a poor prognosis, longer recovery time, longer-lasting side effects and negative outcomes.’

He points out that just like COVID-19, influenza can spread before symptoms appear, putting older family members and friends at risk. “We need to do a much better job of telling folks, including younger folks, that it’s not just about preventing whether or not you catch flu, but if you do catch it, and you have been vaccinated, it’s going to lessen the impact on your quality of life,” he said.

The 2019-20 flu season (data from Oct. 1-April 4) saw as many as 56 million cases of the illness, according to preliminary CDC estimates. As many as 740,000 individuals were hospitalized and up to 62,000 people died. That is a potentially sharp increase from the prior year when 490,000 people were hospitalized and some 34,000 deaths occurred. Seventy to 85% of seasonal flu deaths occurred in people 65 and older, and 50 to 70% of flu-related hospitalizations occurred among this age group.

“I think this fall, nothing could be more important than to try to increase the American public’s decision to embrace the flu vaccine with confidence,” said CDC Director Robert Redfield, M.D., who was interviewed by JAMA Editor Howard Bochner in late August. He pointed out that less than 50% of the public gets vaccinated, so this year it’s hoped that closer to 80 or 90% will decide to get a flu shot. Although most people get vaccinated in early fall, government officials said people with COVID-19 should delay getting their shot to avoid unnecessarily exposing health care workers, according to this MedPage Today story.

The one bright spot is that preventive measures against COVID, including social distancing, mask-wearing, hand-washing and avoiding crowds, are especially vital for older adults and may help minimize the severity of this year’s flu season, writes The New York Times’ Jane Brody.

But that doesn’t mean you shouldn’t get a flu shot, Tan emphasized. “Our social distancing and making performance in the United States is nowhere near what it should be,” he said. “That’s the equivalent of gambling — and why would you do that with your independence or with someone else’s?”

He also noted the huge fiscal impact to nursing homes and assisted living facilities when there is a flu outbreak among residents or staff. As some facilities begin to open up visitation, Tan would love to see policies that prohibit visitors who haven’t gotten vaccinated.

An estimated 66.6 million doses of flu vaccine have been distributed to date and manufacturers will continue to distribute the vaccine throughout the season. Experts recommend that those 65 and older receive the three- or four-component vaccine.

“We don’t have a vaccine against COVID-19 right now, but we do have one against the flu, so why the heck wouldn’t we use it?” he said.

Journalists may want to reach out to local physicians, clinics and hospitals to ask how they’re preparing for the upcoming flu season and how aggressively they are working to get community members and staff vaccinated. They also can contact nursing homes and other congregate living facilities to discuss their policies and procedures to address vaccinations of residents and staff, plus any visitor restrictions they have or plan to put in place.