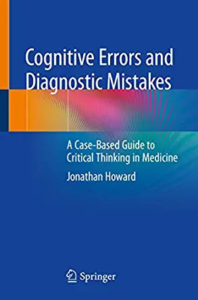 I’m pretty sure Jonathan Howard, M.D., is not psychic — but I’m not 100% sure. After all, almost nothing in science can be stated with 100% certainty. But I could be forgiven for suspecting he had some sort of premonition about the pandemic and the massive challenges it would present to clinicians, researchers, journalists and the public at large, because of the book he published less than two years ago: “Cognitive Errors and Diagnostic Mistakes: A Case-Based Guide to Critical Thinking in Medicine.” (Before you read any further, be aware that I have disclosures related to Howard that will become evident shortly.)

Howard, a psychiatrist at NYU Langone Health, spends a good deal of his free time fighting misinformation and pseudoscience online, especially on Twitter and Facebook. That’s how I came to know him several years ago since our circles overlapped in countering inaccurate info about health and medicine. And his book is one of the most comprehensive sources I know of on the MANY cognitive biases, logical fallacies, research biases and other “thinking traps” that can interfere with interpreting medical evidence, making diagnoses and assessing scientific information in general. Though the book is aimed primarily at providers, it would be a helpful resource in a newsroom as well — especially right now.

Of course, Howard isn’t psychic (I expect him to give me a friendly hard time for suggesting such pseudoscientific nonsense). Many, if not most, folks who work in infectious disease, epidemiology and other branches of medicine knew that arrival of a global pandemic was a question of when not if. But his book is particularly timely, given the huge amount of misinformation, disinformation, propaganda, pseudoscience and other dangers that have accompanied accurate and evidence-based information about the SARS-CoV2 coronavirus and COVID-19.

I’ve been writing and speaking about cognitive biases for years, but still was startled at the volume of biases and fallacies that Howard covered in his book. One is familiar to journalists already, and directly relevant to this post: financial bias, including “mere exposure effect” — familiarity breeds comfort — and “norm of reciprocity” — “the unwritten, though powerful, social norm that people are obligated to repay gifts and favors that others have done for them.”

While I will not receive any monetary or other direct professional benefit from writing about Howard’s book, I have known him for several years (hence my familiarity with him and his work predisposes me toward wanting to spotlight it if I think it’s good). Further, he once allowed me to crash in an empty apartment he owned when I attended a journalism conference in New York City several years ago — a perfect example of how the norm of reciprocity might have influenced my decision to write about his book.

There is no way for me to know whether — had I never previously met Howard or had he never let me crash in that apartment — I still would have looked at an uncorrected proof of the book if he had sent it to me in a cold-pitch email. (I say he initially sent it to me in late 2018, and it’s taken me this long to get around to it, so I’m certain it didn’t lead me to prioritize looking at his galley!)

After all, that’s part of the point of the book — and the reason it’s important for journalists to be aware of the various biases and fallacies out there and our own susceptibility to them. I can say confidently that I wouldn’t have written about the book if I didn’t genuinely find it to be a helpful resource that I will be using and believe other journalists may find worthwhile. I can say further that my interactions with Howard are based on our professional work (his as a physician and mine as a journalist) and that our interactions will continue because I find his work, including commentary and feedback, to be relevant and helpful to mine.

But it’s impossible for me, or any other journalist, to divorce ourselves entirely from the many ways our brains inject bias into everything think and do. For that reason alone, I encourage others to check out the book if they have a way to do so. But then, again, I am biased — just like everyone else.