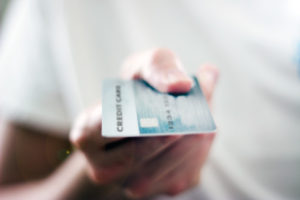 Dental patients can face tough choices when figuring out how to pay for costly services not covered by insurance. In moments of need or pain, they may be offered the option of applying for a medical credit card — right in the dental office.

The credit cards ensure immediate payment to providers, so dentists like them. But patients are not always clear on the terms, which often include deferred-interest provisions. If cardholders misunderstand what they have signed up for and falls behind on payments, they can end up facing inflated bills and crippling debt.

Kenda Williams, 51, who sought care for an aching molar in Torrance, is now cleaning houses to pay off a $6,000 debt for services included some items she says she did not need.

“All I went in for was a root canal,” Williams told Fresno Bee reporter Manuela Tobias, who delved into the troubles with the credit cards and efforts to try to protect consumers in a recent investigative piece.

Tobias’ story was produced with assistance from The California Divide, a statewide media collaboration that seeks to raise awareness about poverty and income inequality through in-depth storytelling and community outreach.

Advocates for California consumers told the Bee that dental patients may be vulnerable, worried and suffering when they sign up for the cards.

“It’s a dentist pitching this product. Your relationship with the dentist is a very intimate relationship,” said Eric Schattl, supervising attorney for Neighborhood Legal Services of Los Angeles County. “You have to trust the dentist — they’re in your mouth.”

Many of the credit cards are issued by CareCredit, the most popular medical credit card on the market, with more than 6 million active accounts, Tobias wrote. The cards can be used to cover dental, eye, medical and even veterinary services.

An official from CareCredit, a product of Synchrony Bank, told the Bee that the vast majority of customers are satisfied with the cards and that any complaints lodged by consumers are taken seriously.

But CareCredit’s business practices have a blemished history, as Tobias reminded readers. In 2013, for example, the New York Attorney General and the federal Consumer Financial Protection Bureau ordered CareCredit to refund up to $34.1 million to potentially more than 1 million consumers deemed to have been victims of deceptive credit card enrollment tactics.

“At doctors’ and dentists’ offices around the country, consumers were signed up for CareCredit credit cards they thought were interest-free, but were actually accruing interest that kicked in if the full balance was not paid at the end of a promotional period,” the CFPB noted at the time.

As a result of that action, CareCredit now prohibits credit over $1,000 from being taken out on the day that a procedure is performed, Tobias wrote. Still, she said, “the Bee found multiple dentists do it despite this prohibition. The company relies on patients to self-report violations.”

California lawmakers have continued to grapple with the problem. A state law passed in 2009 required dentists to disclose to patients that they are signing up for credit with a third party and charge only services that have been provided. In 2014, that law was amended to cover all providers, not just dentists.

A bill signed into state law late last year prohibits providers from signing people up for credit in their offices, Tobias wrote. Still, the law allows providers to promote materials so that patients can sign up for credit on their own, and accept deferred interest credit products for payment, she added. The law requires that services must be provided within 30 days of payment.

Consumer advocates told the Bee that they are continuing to worry about medical credit cards.

“Ted Rossman, an industry analyst at CreditCards.com, advises consumers to stay away from deferred interest plans, regardless of where they sign up for them,” Tobias wrote.

“‘I’m really suspicious of this idea [that] you can be charged retroactive interest if you can’t make all the payments before the clock runs out,’ Rossman said. ‘That can end really badly.’”