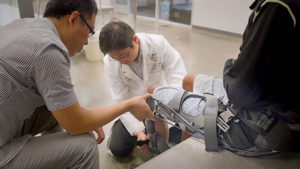 A new line of wearable robotics could keep seniors on their feet a lot longer.

Think of it as a lightweight version of the armor that comic book hero Tony Stark dons as Iron Man when he fights villains. What we’re talking about are exoskeletons.

A prototype developed at City University of New York (CCNY) and tested at the University of Texas Health Science Center at Houston (UTHealth) fared well in a pilot study of people with walking difficulties. Now a $1.3 million grant from the National Institute on Disability, Independent Living, and Rehabilitation Research (NIDILRR) will help researchers evaluate the model on seniors who have difficulty with their gait or stride.

Mobility is the most common disability among people 65 and older in the United States, according to the U.S. Census Bureau. Nearly one-third of adults age 65 years and older have a hard time walking three city blocks.

Conventional exoskeletons are typically heavy, bulky, expensive, and primarily suited for individuals with little voluntary movement. But a new hybrid soft exoskeleton combines the advantages of rigid exoskeletons and textile-based exosuits to help overcome lower-limb impairments, particularly for seniors. The new design is based on soft materials, including cables, elastomers, and artificial muscles, according to Hao Su, a mechanical engineer and researcher at CCNY who designed the unit.

“Our prototype is approximately 60 percent lighter than commercially available exoskeletons,” said co-collaborator Gerard Francisco, M.D., chair of physical medicine and rehabilitation at the UT McGovern Medical School and the chief medical officer at TIRR Memorial Hermann. “In addition, our model is run by the user, not the robot. Wearers aren’t forced to walk in a pre-defined path.”

Approximately 4.7 million people in the U.S. would benefit from powered lower-limb exoskeletons due to neurological disorders such as stroke, polio, multiple sclerosis, and spinal cord injury, according to Francisco.

“Our long-term vision is to make assistive robots accessible to everyone who needs them,” said co-collaborator Shuo-Hsiu (James) Chang, PT, Ph.D., an assistant professor of physical medicine and rehabilitation at McGovern Medical School and administrative director of the NeuroRecovery Research Center at TIRR Memorial Hermann. “They could be worn underneath your clothing at home or at work.”

But despite the advancement of technology, Chang said the state-of-the-art exoskeletons are not suitable to promote independence and community living. He said there’s a pressing need for wearable robots that can improve the quality of life for broader populations in community settings.

Efforts at developing age-friendly mobility suits are nothing new. Fast Company reported on a different exoskeleton effort in 2016. But as that article pointed out, many challenges remain, including reducing the weight of the unit, improving its attractiveness so people will wear it, figuring out how an older person can don the suit and later adjust it to use the toilet without help.

So it’s doubtful that our parents or grandparents will become cyborgs (or Iron Man/Woman) any time soon. However, as technology and materials continue evolving, some researchers predict we could see commercially available exosuits for older adults within the next five years.

More information about the research project, “Lightweight and Affordable Soft Knee Exoskeletons to Enhance Independent Living for Broad Lower-Limb Disability Populations,” is available at the NIDILRR, part of the National Institutes of Health.

While we wait for affordable, usable exoskeletons to come on the market, journalists may want to look at what other mobility or fall-prevention programs are available in their communities. Are there any safety efforts underway to make sidewalks, buildings, or public spaces more age-friendly?