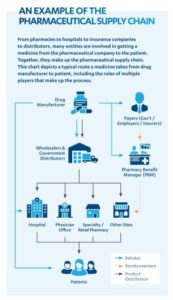 One of the big health care stories of the past few years has been how much money pharmaceutical manufacturers spend on rebates to promote prescription drugs. Pharmaceutical companies pay out rebates to just about every participant in the supply chain.

A report issued last year from the Janssen Pharmaceutical Companies (a division of Johnson & Johnson) showed that pharma companies give rebates to those companies that pay for health care (including health insurers, the government, and employers) and to PBMs, hospitals, physician groups, specialty pharmacies, wholesalers, government distributors, and to patients themselves.

While rebates play a role in helping to keep overall health insurance premiums and health care costs down, they also are a perverse incentive that helps keep the list price of medications high. In “A primer on prescription drug rebates: Insights into why rebates are a target for reducing prices,” from the actuarial firm Milliman, researchers explained that many manufacturers use rebates, including automakers and computer companies. Pharma companies use them mostly for high-cost, brand-name prescription drugs in competitive therapeutic classes because they provide an incentive for PBMs and health insurers to include their drugs on formularies and gain a preferred placement on formulary tiers.

Employers use rebates in this way too, as we learned during a webcast on formularies in November, “Employers try to trim wasteful drugs from health plans.” We also covered this topic in a blog post, “Report explains the need for a waste-free formulary for pharmacy benefits.”

PBMs, health plans and employers use formulary tiers to steer consumers toward low-cost, preferred drugs. PBMs require low or no copayments for medications on lower tiers, and consumers typically pay the most out of pocket for drugs on higher tiers.

Rebates are controversial, as we learned a year ago when the Trump administration proposed a rule to eliminate them, but eventually backed off. The proposed rule would have lowered prescription drug prices and out-of-pocket costs by encouraging manufacturers to pass discounts directly to patients, as this news release from the U.S. Department of Health and Human Services explained.

The HHS plan would have changed the way drugs are priced, as Stephanie Armor reported for The Wall Street Journal. “Under the current system, pharmacy-benefit managers, or PBMs, negotiate confidential rebates and discounts on many branded prescription drugs,” she wrote. “Those deals aren’t always passed along to customers at pharmacies.”

Armor included an important detail from a Congressional Budget Office report in May. The proposal would have increased spending for Medicare by about $170 billion and spending for Medicaid by about $7 billion, according to “Incorporating the Effects of the Proposed Rule on Safe Harbors for Pharmaceutical Rebates in CBO’s Budget Projections — Supplemental Material for Updated Budget Projections: 2019 to 2029.”

The proposed rule also would have caused health insurance premiums to rise because health plans use rebates to keep premiums low, the CBO added.