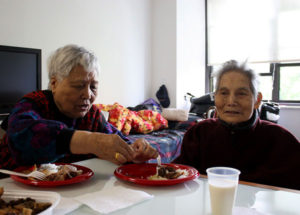 About 41 million unpaid family caregivers provided an estimated 34 billion hours of care — worth $470 billion — to their parents, spouses, partners, and friends in 2017, according to a new report from AARP’s Public Policy Institute (PPI). The report explores the growing scope and complexity of caregiving today, which includes an aging population, more family caregivers also in the paid workforce and an increasing amount of medical and nursing tasks now provided at home.

Ensuring better recognition of and support for family caregivers has become a health, economic, and social imperative, according to the report. Several co-authors discussed the analysis at a Nov. 14 press conference during the Gerontological Society of America annual meeting in Austin, Texas.

The changing nature and complexity of caregiving, along with shifting family structures and an increasingly older population, can mean more people in the labor force are juggling work and family caregiving. “Thus, the expectation that families alone will provide care for an older person or an adult with a chronic, disabling, or serious health condition is unsustainable,” the report concluded.

Although the number of family caregiving instances increased slightly, actual caregiving hours decreased compared with prior studies. In 2013, 40 million family caregivers in the United States provided an estimated 37 billion hours of care; in 2009 the estimated cost was $450 billion with an estimated 42.1 million caregiver hours, according to the report.

Some of these discrepancies may be due to more caregivers working outside the home, and also some people not self-identifying as family caregivers. At the same time, the economic value of caregiving has increased, according to co-author Susan Reinhard, Ph.D., a PPI senior vice president.

The report calculates that nationally, caregivers spent an average of 16 hours a week caring for a loved one, at an hourly wage of $13.81, which is higher than in previous years. A state-by-state breakdown is available that includes the number of caregivers, hours, and economic value, which can vary by as much as $8 per hour.

A new demographic of family caregiver is emerging, and it may not be what you think it is, said Lynn Feinberg, AARP senior strategic adviser and another report co-author. “Caregiving (is) not just a woman’s issue: 40% of caregivers are men, 40% represent multicultural diversity and more millennials are taking on these tasks as well.”

Caregivers also are handling increased intensity and complexity of care, such as changing bandages, managing multiple medications and handling medical equipment with little preparation, she said. They are taking on the role of care managers, juggling numerous physicians and settings, and coordinating care across LTC settings, which is perhaps the most significant stress on caregivers today.

More family caregivers are in the workforce — some 60% work full- or part-time in addition to their caregiving responsibilities. This trend will continue, according to Feinberg, and those who have to pull back face substantial economic risk from loss of income, benefits, contributions to their own retirement savings, or reduced Social Security benefits. Also, family caregivers can face thousands of dollars in in projected out-of-pocket costs each year. In 2016, caregivers spent nearly $7,000 on average; long-distance caregivers spent approximately $12,000.

There’s also a growing gap in available caregivers. In 2026, baby boomers start turning 80, the age when the risk for LTSS starts increasing. In about 15 years, there will be more older people than those under 18 in the U.S., but the potential pool of family caregivers is shrinking.

There are some positive trends on the caregiving front, according to Rita Choula, AARP’s director of caregiving projects and a report co-author. Among them: growing momentum across the country for paid family leave.

“This is very important to better support them to do their daily jobs and career,” she said.

Many families now receive additional training for complex medical tasks when a loved one is discharged from hospital to home, thanks to the CARE Act (Caregiver Advise, Record, Enable), which is law in 43 states. The RAISE Family Caregivers Act (Recognize, Assist, Include, Support and Engage) will create an integrated national caregiving strategy across the U.S. once it’s fully funded and implemented.

Caregiving is a non-partisan concern, Feinberg said. It’s not as politically charged as some other issues because it hits families in every state, whether red, blue or purple.

The analyses calculated the estimated $470 billion in care equates to about $1,450 for every person in the United States (325 million people in 2017). The total economic value of caregivers is more than all out-of-pocket spending on U.S. health care ($366 billion in 2017) and roughly three times the amount Medicaid spent on long-term services and supports in 2016 ($154 billion).

These estimates are based on a meta-analysis of four surveys of family caregivers between 2015 and 2018, adjusted to a standard definition: caregiver age 18 or older; care recipient age 18 or older; providing care currently or within the past month; year 2017; and providing assistance with activities of daily living (ADLs) such as bathing and dressing, instrumental activities of daily living (IADLs) such as managing finances or providing transportation, or medical/nursing tasks, such as medication management or preparing special diets.

The report offers recommendations to improve support for family caregivers, including:

Journalists may want to look at the trends for aging in their state and the needs of increasingly diverse populations of older adults and their caregivers. Also, explore the extent to which their state is prepared to address evolving support needs, such as access to home-based services, language barriers and other social determinants of health.