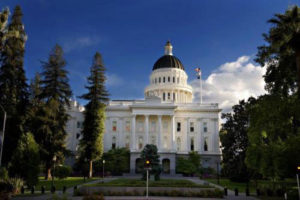 The California State Capitol is the state’s working seat of government.

Lawmakers in several states have introduced — and in some cases, already approved — legislation that could restrict the way freelance writers operate next year.

In California, Assembly Bill 5 (AB 5) restricts employers from classifying workers as independent contractors rather than employees under certain conditions. Approved by Gov. Gavin Newsom in September, it goes into effect on Jan. 1. Similar bills in New York and New Jersey (S4204) will make waves during the 2020 legislative session.

Also called the “gig worker” bill, AB 5 was created with Uber, Lyft, DoorDash and Instacart drivers in mind, trying to make it tougher for those companies to treat them as contractors rather than employees who deserve benefits. During the California legislative session, several groups — including freelancer writers, real estate agents and hair stylists — stepped up to voice their concerns. Some professions are now exempt, including doctors, lawyers, graphic designers and marketers. Freelance journalists didn’t make the list.

“This is a classic case of unintended consequences,” said AHCJ member Linda Marsa, an independent writer and contributing editor for Discover. “The thrust of the bill is wonderfully progressive California, but what’s really scary is that people don’t know the implications.”

The bill comes on the heels of the 2018 state Supreme Court ruling, Dynamex Operations West v. Superior Court. Trucking firm Dynamex fired its employees and made them contractors, and the ruling created a basic ABC test that says Californians should be employees unless they:

The vague description worries freelancers. The second prong, for instance, could include tasks such as writing or producing a story for a media company, which could be considered an aspect of “main business.” A coalition of associations, led by the American Society of Journalists and Authors and AHCJ member Randy Dotinga, lobbied legislators for changes and clarification.

For now, freelance writers and photographers are currently restricted to 35 “submissions” per client per year. If they pass the limit, they must be hired to staff or stop working for that client, otherwise the company could be sued for “misclassifying” the freelancer.

For now, a submission can include more than one story, blog post or social media post if it’s related to the same event or topic. However, content produced on a recurring basis should be considered separate submissions. That means conference coverage can be filed as one assignment, but a weekly column must be counted per piece. This has already affected several California freelancers with regular columns, Dotinga said.

“Weekly columnists are being de-weeklied,” he said. “Others are being blacklisted.”

Companies such as transcription service Rev.com have decided not to hire California freelancers. A recent Patch Media ad sought stories about California from reporters who don’t live there. Other freelancers are already receiving “Thanks, but no thanks” notices from their clients during year-end discussions about contracts in 2020, said Vanessa McGrady, a California freelancer.

“It’s critical right now that journalists understand this law,” she said. “Even if you live somewhere else, this may be coming your way, too.”

McGrady, Dotinga and other freelancers continue to meet with representatives in California. They hope for a blanket exemption that will remove reporters from AB 5 entirely, given First Amendment concerns. Even then, an “emergency fix” likely wouldn’t take effect until 2021, Dotinga said. He foresees additional frustration for underrepresented voices, such as the LGBTQIA community and writers with disabilities.

“Freelancing is how women, older writers and others avoid gender and age discrimination and work for themselves,” he said. “From one progressive to another, this is ill-advised.”

AHCJ members should keep an eye on the legislation, both in California and in their own state. Organizations such as ASJA are considering legal options, Dotinga said, and freelancers are trying to understand details such as business-to-business exemptions, video and audio submissions, and three-prong ABC tests in other states such as Massachusetts, where the law seems broad enough for any freelancer working at home or without required work hours to be exempt.

“Even exempt clients, who do marketing and strategic content, don’t know they’re exempt and are beginning to limit their contracts, so this isn’t just affecting news outlets,” McGrady said. “It’s creating chaos and a chilling effect.”

3 thoughts on “New bills could hinder freelancers’ work in 2020”