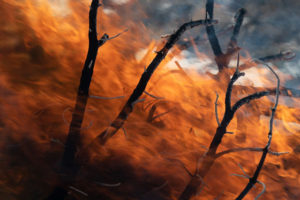 So you’re working away — perhaps at home — on a story about vaping or high prescription costs or results from a new clinical trial, not paying much attention to the news. All of a sudden your editor calls to tell you that winds have stoked a grass fire that’s now raging and headed your way. Your editor wants you to jump on it. All the other reporters are out covering other blazes or emergencies.

But you’re a health reporter, not a fire reporter! What do you know about covering this stuff? And oh, by the way, an hour later, you learn you’re going to have to evacuate your family and precious belongings from your own home as well.

My long-time colleague Leslie Wolf Branscomb spent 18 years at the San Diego Union-Tribune, most of it covering courts, crime and public safety. She knows all about jumping into action on both counts. She’s covered lots of fires on the ground. And during the Harris fire of 2007, she had to evacuate her own family from their home in Chula Vista a few miles from the Tijuana border in California, and couldn’t get back in for several days. Fire fighters stopped the blaze about two miles away as it was burning across and down San Miguel Mountain, right toward her family’s home.

Branscomb left journalism in 2007, taking the second of three buyouts.

She posted these tips on her Facebook page for her friends and fellow journalists, and gave me permission to share a lightly edited version of them. She asked me to emphasize that they are her own views from her personal experience, and do not necessarily reflect the views of her current or former employers.

Branscomb shares some tips that I’d never thought about myself, even though I had hot embers blown onto my front lawn during the San Diego fires in 2003, and despite the fact that that Cedar Fire was miles away.

For example, make sure your car is on the street for a quick getaway, not parked in the garage, because your garage door may not work in an emergency! Start the car while you’re loading it, because the smokier it gets, the more problems you might have starting the car.

And don’t wear polyester, because it can melt and stick to your skin.

Here are Branscomb’s 15 tips and wisdom for covering and dealing with wildfires:

As the Northern California wine country is reeling from the fires, and deaths and destruction, we need to remember it could still happen near you. October is the most dangerous month, when fields are dry and full of fuel, and the temps go to 80, 90 and above, with low humidity. When the Santa Ana winds begin, it’s a recipe for disaster. I covered the great wildfires in San Diego County in 2003 and 2007, and many smaller ones. I was trained by Cal Fire, covered many fires, interviewed many who’d lost everything, attended the funerals of those who couldn’t get out in time, and was evacuated myself in 2007. Here’s my advice, for residents and news reporters, based on my personal experiences. (Please copy and share at will)

I fear that due to lack of resources for today’s newsroom training, new young reporters might not receive the Cal Fire training that media used to get. I have so much to say, having covered numerous wildfires and being evacuated myself.

Editor’s note: We know there are many other tips out there from those of you who have covered fires and other natural disasters. Please contribute your advice in the comments.