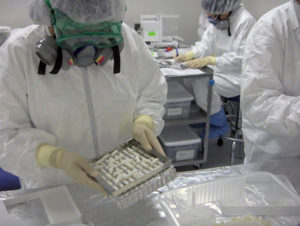 To effectively report on medical research, you should understand how big a difference that an intervention or an exposure makes.

Absolute risk can be the best for this, but many studies report other comparisons as well. Sometimes a study reports this effect size — the magnitude of difference between two groups — in terms that literally are Greek to me:

Glass’s delta (Δ), omega(Ω)-squared, Psi (Ψ)… and that’s before we get to the effect sizes named for folks: Hedges’ g, Pearson r, Cramer’s V and the letters of the apparently prolific Cohen — d, h, q, f… Sometimes they’re mixed, like Spearman’s rho (P or ρ) or Cohen’s omega (ω), commonly written as Cohen’s w since the lowercase omega resembles one.

Ok, I’ll stop. Your head is surely spinning as much as mine. Hopefully, you don’t encounter these very often, except perhaps Cohen’s d, but all are examples of effect sizes that could pop up in a study, especially at research conferences. Effect size is an essential aspect of reporting on medical studies because it’s nearly impossible to characterize the clinical significance of findings without reporting on effect size.

It would require a statistics class (or two or three) to explain all those above (which I’m not qualified to do). But we have added a link in the Medical Research Core Topic to a Journalist’s Resource tip sheet on effect sizes in general: What they are, what they mean, what they don’t mean and why you need to have some familiarity with them.

The tip sheet, relying on the work of biostatistician and journalist Regina Nuzzo, a presenter at Health Journalism 2019, primarily focuses on effect size measurements you’re more likely to have heard of or written about: relative risk, risk ratio, hazard ratio and odds ratio. She discusses what these mean and how to interpret them. Then, for those who want to go more in-depth or want to research a specific question about effect size, we’ve added several resources on effect size to the Medical Studies Core Topic Resources page, including a link to a page containing a chart that helps convert some effect sizes, such as Cohen’s d, into estimated lay-friendly terms.