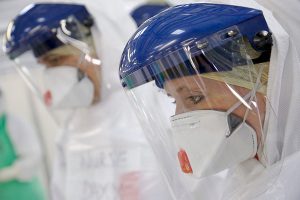 Public health emergencies often happen — from a severe flu season or measles outbreak to wildfires or a severe weather event such as a hurricane. Count on them to be a mainstay of the health beat.

Experts in health security continue to debate the readiness of the health system for emergencies. At a July 19 National Academies of Sciences event, Robert Kadlec, the U.S. Department of Health and Human Services’s Assistant Secretary for Preparedness and Response (ASPR), said that he believes the while the public and private sectors have plans that “have addressed a lot of continuity of operations and classical preparedness” there remains more to be done.

Especially challenging is getting hospital systems to talk with one another sufficiently and coordinating with local leaders for the possibility of a surge of patients should there be a disaster that involves thousands of patients.

“We don’t have a health care system, we have an amalgam of public and private entities that sometimes work together,” said Lisa Koonin, founder of Health Preparedness Partners and the CDC’s former deputy director of influenza coordination unit.

The challenges for hospitals were illustrated during the severe 2017-18 flu season, during which hospitals in many parts of the country were overwhelmed with sick patients. Medical centers responded with asking medical personnel to work overtime, setting up triage tents in their parking lots and canceling elective surgeries.

Health systems are supposed to meet with each other to plan for large-scale emergencies under health care coalitions that were funded by ASPR. As of 2013, there were 500 coalitions, many in urban areas, and at least one in each state, reported the Production and Operations Management Society in 2018.

One such coalition is the Northwest Healthcare Response Network, which represents health systems in the 15 counties and 25 sovereign tribal nations in western Washington state. The network provides a forum for the systems to discuss planning for public health emergencies, such as the impact of an earthquake.

“The big headache is getting the right people to focus on this as a priority,” said Onora Lien, the network’s executive director. “We need to have a framework for talking about how many patients can [each hospital] take [in an emergency], and many [hospitals] don’t want to share that information.”

Hospitals see the number of beds available as proprietary information, she added. They don’t want to give information to competitors about how many beds are open at any given time and are reluctant to work on creating a system for providing that information for an emergency.

“We need to externally create more pressure to explain why that information sharing will make a difference,” Lien said.

Some health leaders at the National Academies event suggested that the federal government develop policies that would prod health systems to work together better, including providing more reimbursement dollars to hospitals to spend on emergency preparedness. Currently, there is a Hospital Preparedness Plan that doles out grants to hospitals to spend on equipment and training, but hospitals say it isn’t enough money.