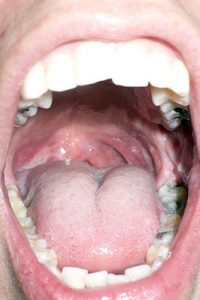 An estimated 700 species of microbes thrive within the unique ecological niches found within the human mouth, including the hard surfaces of the teeth, soft linings of cheeks and pockets of the gums.

They live in complex communities, and when healthy, they co-exist in an intricate balance. But sometimes that equilibrium gets upset.

Sweet foods and drinks, for example, can give sugar-loving microbes the upper hand to run rampant, spinning a sticky self-protecting matrix and producing acid that can destroy the tooth enamel.

A recent cover story in the National Institutes of Health (NIH) monthly newsletter, News in Health, offers a reader-friendly update on what researchers are learning about the microscopic workings of oral health and disease.

Earlier generations of researchers may have pinpointed specific bacteria such as Streptococcus mutans and Porphyromonas gingivalis as the chief culprits of banes such as caries and periodontal disease.

“Many bacteria in our mouths depend on help from other members of their community to survive and prosper,” said Floyd Dewhirst, a prominent researcher based at the Forsyth Institute in Cambridge, Mass.

This approach may offer new hope in the battle against conditions such as early childhood caries (ECC) an aggressive disease that has been estimated to burden as many as 23 percent of young US children.

A team led by Hyun (Michel) Koo, a dental researcher and oral health expert at the University of Pennsylvania, has concluded that a fungus in the plaque of children with ECC accelerates the progress of the disease by working in concert with the matrix- and acid-making bacteria, the story reports.

“Bacteria by itself can cause tooth decay,” Koo tells News in Health. “But when fungus is there it boosts up the entire machinery.”

Koo and his team have developed tiny nanoparticles designed to penetrate and destroy the matrix to kill acid-producing bacteria without harming helpful oral bacteria. They are still hoping to test the approach upon humans.

The NIH article includes links to other NIH articles on a range of oral health topics such as “Don’t Toss the Floss,” which weighs the advisability of flossing.

While no large-scale study has proven that the practice of cleaning between the teeth and gums with a sturdy string can prevent severe gum disease, the article reminds readers, several smaller clinical studies have found that flossing, in addition to tooth brushing, can reduce mild gum disease significantly better than brushing alone.

“The fact that there hasn’t been a huge population-based study of flossing doesn’t mean that flossing’s not effective,” NIH oral health expert Tim Iafolla explained in the article. “It simply suggests that large studies are difficult and expensive to conduct when you’re monitoring health behaviors of any kind.”