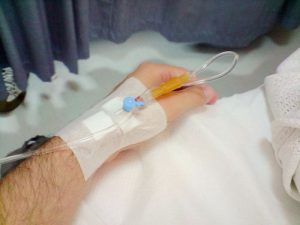 To some of us, this procedure might have sounded too good to be true: A national network of infusion clinics offers to relieve just about any complication from diabetes, including neuropathy, nephropathy, cardiovascular problems and erectile dysfunction. It can do so as long as each diabetes patient enrolled is willing to sit for four hours every week or two while a pump pushes insulin through the patient’s veins.

Offered by Trina Health, this procedure was said to mimic the effect of the pancreas. But there was no data showing it worked; only testimonials from people who said they had been patients. But, to some desperate patients, it seemed plausible.

Sensing that, indeed, this procedure sounded unbelievable, Cheryl Clark, a senior investigations reporter for MedPage Today, in New York, and for inewsource/KPBS in San Diego, had questions for Trina Health. Those questions led her to a series of articles, called “Hustling Hope,” that MedPage Today and inewsource/KPBS published over four months in 2018. Listed in the links below is a recent story published at the end of May this year and, Clark says, there will be at least one more.

For her efforts (and those of her colleagues at inewsource/KPBS: Lorie Hearn, executive editor; Megan Wood, photographer/videographer; Brandon Quester, photographer/videographer; and Laura Wingard, editor), the series earned a first-place Award for Excellence in Health Care Journalism in the investigations (small) category, awarded at Health Journalism 2019 in Baltimore. “Hustling Hope” also garnered a first-place prize in the San Diego regional Society of Professional Journalists contest.

In a new “How I did it” piece, Clark explains how she got a tip from a physician and a nudge from a Facebook algorithm to pursue the story and one lead after another over many months.