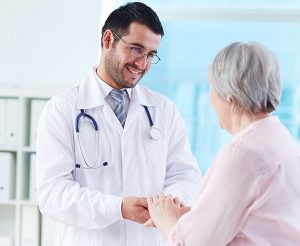 There’s little question in Lisa McGuire’s mind that Alzheimer’s disease is a public health threat in progress. She leads the CDC’s Alzheimer’s Disease and Healthy Aging Program at the National Center for Chronic Disease Prevention and Health Promotion. Both the prevalence and costs of Alzheimer’s are expected to increase as baby boomers age, meaning this crisis is fast approaching.

So the CDC, along with the Alzheimer’s Association, embarked on an ambitious “Healthy Brain” initiative to help bring down the trajectory. They created a series of roadmaps for state and local health departments, highlighting different health strategies that can quickly and easily blend into existing public health programs.

“We’re hoping at CDC that this roadmap series will really help chart a course that will allow us to have a dementia-prepared future and with lots of professionals to help,” McGuire said at a panel on the topic during the recent American Society of Aging conference in New Orleans.

Congress gave the effort an additional boost when it passed, and President Trump signed, the BOLD Act, which authorizes a $100 investment by the federal government over the next five years for prevention, treatment, and care for those with Alzheimer’s.

According the Alzheimer’s Association, about 5.8 million adults have Alzheimer’s disease, and risk increases with age. It’s the fifth leading cause of death for people 65 and older. Women, and certain minority groups are more prone to developing the disease.

In addition to its broader roadmap which looks at the challenges for the population at large through 2023, the Healthy Brain Initiative has also released its first roadmap for Indian country, targeting specific needs of American Indian/Alaskan native communities, according to Molly French, director of public health at the Alzheimer’s Association, and a panel co-presenter.

“Both roadmaps pay attention to risk reduction, early detection, caregiving data, as well as workforce needs. They both take a life course approach,” she said.

These roadmaps don’t just look at older people, but encourage public health experts to think about brain health throughout life. This roadmap also includes a strong focus on policies and systems changes, and on health disparities.

To help aid adoption of the roadmap, there are also issue maps, which address key priority areas— brain health risk reduction, early detection, support for caregivers, using data and evidence to drive change. And there’s also a section on developing workforce competencies for those who interact with older adults and their caregivers.

“We’ve identified 25 actions that public health agencies and their partners can pursue over the next five years to promote brain health, improve diagnoses and care for people living with cognitive impairment, and better support caregivers in their essential role,” said French.

These steps range from establishing cross-sector partnerships, collecting and analyzing data, to eliminating health disparities that are critical to achieving major gains against Alzheimer’s.

This approach aligns with the four traditional domains of public health action items:

According to Susan Engels, who heads up the office of the State Unit on Aging, Aging Long Term Support Administration, in Washington, 95 percent of Medicare beneficiaries with dementia also have one or more other chronic conditions, like blood pressure or diabetes.

“We know about 25 percent of hospitalizations are preventable for people who do have dementia, she said. Getting that early diagnosis or being aware of a diagnosis allows a person to manage their other chronic co-morbid conditions or look at how to reduce their risk of falling.

“When somebody ends up in an emergency room or a hospital, it is a big deal. It’s a tremendous, tremendous deal for all involved,” she said.

The roadmap also encourages increased awareness of caregiver health, because we know one out of three caregivers say that their health has gotten worse during the time that they are caregiving for their loved one, Engles added.

Taking a life course perspective provides health officials with additional opportunities for risk reduction, such as encouraging people to live healthier lifestyles, regardless of age. Another is encouraging more people to speak with their providers about changes in their memory.

“We need to work on stigma, we need to work on raising awareness of the general public to know that there are some things that can be done and oh, by the way, just because you’re experiencing memory loss doesn’t mean it’s dementia, it could be a reversible cause,” she said. “But you’re not going to know that unless you talk to your health care provider.”

Engles defines “health provider” as broadly as possible, to include nurse practitioners, clinical community health workers, physicians, dentists, whoever comes into contact with older people or their caregivers.

Public health messaging could be impactful related to modifiable risk factors, like diet, exercise or smoking cessation. But the aging network also needs to modify how people think about dementia, she pointed out.

“Lack of disease knowledge and planning for the future is opportunity lost. So we really need to recognize the benefits of early diagnosis and sharing that diagnosis,” she said. Additionally, families experiencing dementia must become empowered so that they can have greater connection with others, increase understanding of the disease and the services available, and take advantage of those early opportunities for legal financial and advanced planning.”

In Washington, the number of people with dementia will increase by 181 percent in the next 20 years, according to Engles. That’s pretty alarming and highlights the need for an aggressive plan.

They developed a state-approved Alzheimer’s and dementia action plan in 2016, supported by public/private partnerships, under the leadership of the state aging and long term support administration. Their approach increases public awareness and engagement; educates and prepares communities for rising prevalence of dementia; ensures well-being and safety; provides family caregiver supports, looks at early identification and availability of long term services and supports in the setting of choice; and promotes innovation and research related to to cause and care. It’s currently an 1115 demonstration project, budgeted at 140 million over five years.

“Primary care physicians told us they wanted tools, so we got information out to them on diagnosis and what to tell people about ongoing care and support,” she said. Families wanted to know what to expect, and action steps for the different stages of the disease. The plan also includes community health worker training, through a collaboration with Department of Health.

This project is just what the CDC was hoping to achieve with the Healthy Brain Initiative, McGuire said.

“Systems like public health agencies, long-term supports, services and health care must work in synergy to address the increasing Alzheimer’s and dementia crisis,” she said.

Public education, supportive services for families and individuals and well-informed medical practitioners are key components to doing this, McGuire concluded. Data and messaging will also be vital to tell the story to increase funding and reverse stigma.