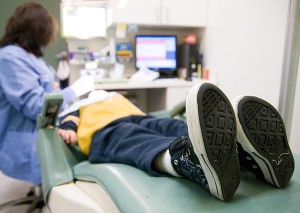 The California Dental Board is investigating the case of a 4-year-old boy who died after receiving anesthesia at an Oakland dental office.

The Dental Board of California has confirmed that it is investigating the death of a patient at the Oakland office of Youthful Tooth. In a written statement, the board declined to comment on the specifics of the case. Reporter Gwendolyn Wu offered these details in a May 16 story for the San Francisco Chronicle:

“Dũng Lý went in for a dental procedure at Youthful Tooth in Oakland on April 24, according to a GoFundMe page and Facebook posts by friends and family,” she wrote. “He was given two doses of anesthesia and stopped breathing during the procedure, the family said.”

Lý was rushed to Children’s Hospital in Oakland, where he died. According to a relative, the boy had a history of breathing problems, Wu reported.

While many details remain unknown, the story calls to mind other deaths and the agonizing debate they have prompted in California.

But the law fell short of the change for which the Sears family had advocated most strongly: a requirement that two highly-trained professionals, including one dedicated to monitoring the anesthesia response, administer care to children undergoing oral surgery.

The Sears family faced strong opposition from groups including the California Dental Association that argued the restriction would be costly and that it would not make the system safer. Just as legislators were deliberating the measure, 3-year-old Daleyza Hernandez-Avila died after being placed under general anesthesia at a Stockton dental surgery center that reportedly routinely uses two highly-trained providers – an anesthesiologist and a dentist – during oral surgery.

Laurel Rosenhall, who covered the long debate over Caleb’s Law for CALmatters, reflected on the outcome of the vote in a 2017 Q and A.

“This (Hernandez-Avila) case clearly weighed on legislators considering the law to require two providers. They pointed to it as evidence that the two-provider model wouldn’t necessarily prevent tragedy. This echoes an argument dentists have made all along: that deaths are rare, but they happen in all kinds of settings.”

Other experts have stressed the importance of reducing the burden of dental disease that lands so many children under sedation or anesthesia.

Tooth decay remains the most common chronic health problem of young children and often decay becomes extensive before it receives attention. Children with advanced decay often are placed under moderate sedation or general anesthesia for treatment. Between 100,000 to 250,000 pediatric dental sedations are performed annually in the United States, observed the authors of a December 2017 “Ethics Rounds” commentary for the Journal Pediatrics.

A panel of commentators called for stronger reporting requirements and systems-level analysis to better understand and prevent adverse events related to dental sedation and anesthesia. They also called for earlier intervention in the progression of childhood tooth decay and wider access to preventive care and non-invasive treatments such as silver diamine fluoride that could make the delivery of care under anesthesia unnecessary.