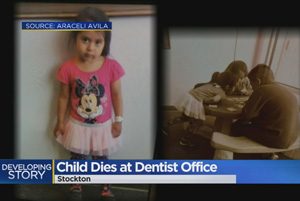 Three-year old Daleyza Hernandez-Avila died on June 12 after being placed under general anesthesia at a Stockton, Calif., dental surgery center.

The child was scheduled to undergo routine treatment, including the placement of dental crowns and a possible tooth extraction during her appointment, Veronica Rocha reported for the Los Angeles Times.

“At some point, something went wrong,” Rocha wrote.

The girl had a reaction to the anesthetic, was stabilized and then sent to Saint Joseph’s Hospital, David Thompson, the administrator of the Children’s Dental Surgery Center told KTXL-Sacramento.

“It’s a terrible, terrible tragedy honestly and our thoughts and prayers are really with the family right now,” Thompson said in the interview.

But the pre-schooler’s death should also be seen as part of a larger story, reporter Steve Large told viewers of KOVR-Sacramento.

He said Daleyza’s case “is highlighting a years-long pediatric dental care battle at the state Capitol to reduce the risk of children’s deaths in dental surgeries,” Large reported.

A newly-enacted state law called Caleb’s Law, has “launched efforts for stricter guidelines for pediatric dental surgery, where the required training to administer sedation drugs in dental surgeries is lower than in other healthcare professions,” Large reminded viewers.

The law, which went into effect Jan 1, memorializes Caleb Sears, a Bay area 6-year-old who died following oral surgery under general anesthesia in 2015.

Caleb’s parents contended that their son’s oral surgeon should not have been allowed to both administer anesthesia and perform surgery at the same time. “Those duties are separated in hospitals,” Laurel Rosenhall reported for CALmatters.

The Sears family fought for a law requiring that parents be warned when a single provider is both administering anesthesia and performing dental surgery. Lobbyists for dentists and oral surgeons opposed the measure however and the final version of the law included a more general warning about the risks of anesthesia, better data collection on dental deaths and laid the groundwork for additional changes in the future, Rosenhall wrote in a follow-up story.

In Stockton, at the Children’s Dental Surgery Center, where Daleyza went for her appointment June 12, a team approach was in place, center administrator Thompson told KOVR.

“We only treat patients here with an anesthesiologist and a dentist separately, with both of them here at the same time,” Thompson said.

“We do not do what we call single operator where one dentist does the anesthesia and the dentistry at the same time. We are fully equipped like a small hospital.”

Local police and the Dental Board of California are investigating the child’s death.